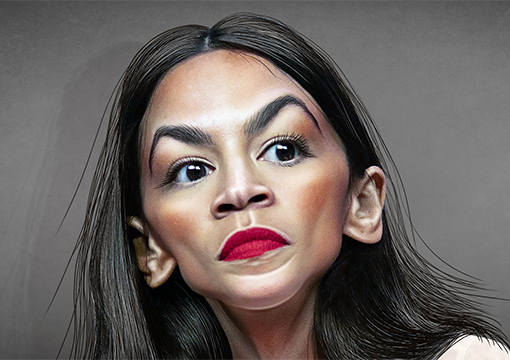 The Week’s Most Pneumonic, Teutonic, and Demonic Headlines

ALEXANDRIA OCASIO-CORTEZ: WORKERS OF THE WORLD, STOP WORKING!
Are we the first to notice how much the shovel-faced communist Congresslady Alexandria Ocasio-Cortez resembles the dueling, enigmatic, black-and-white secret agents in Mad magazine’s long-running comic strip Spy vs. Spy?

It’s common knowledge that although Cortez fetishizes poverty as if it were a high-priced pet Chihuahua, she grew up in a cushy and almost entirely white New York suburb and has lapped at luxury’s teat ever since she shot cannonball-like from ’twixt her mama’s legs. And like any rich person with a guilt complex which they try to expunge through Marxism, Cortez not only claims that she represents workers, but that she understands them. She recently encouraged low-income workers—who are being the most economically savaged by this crisis—to stage a general strike and NOT return to work once the shutdowns are lifted:

When we talk about this idea of reopening society, you know, only in America does the president — when the president tweets about liberation — does he mean go back to work. When we have this discussion about going back or reopening, I think a lot people should just say ‘no’ — we’re not going back to that. We’re not going back to working 70-hour weeks just so that we could put food on the table and not even feel any sort of semblance of security in our lives.

The only thing this broad has ever spent 70 hours a week doing is taking selfies.

Anyone who actually understand what it’s like to be a member of the working class—in other words, someone who’s felt the grip of anxiety knowing if they mess up for even a month, they’ll be hungry or homeless—would jump at the chance for employment when this New Great Depression finally ends. They also know that if they took Cortez’s dubious advice, they’d be replaced by machines before AOC could fix her lipstick.

“RACIST” DRAWING OF INJUN WOMAN TRAGICALLY WIPED FROM BUTTER PACKAGING
If you’re a young American male who lived at any time from 1921 to the current year, you likely are intimately familiar with the “boob trick” you can do by taking a box of Land O’Lakes butter and bending the cardboard so that the Indian maiden’s exposed kneecaps are where her breasts would be—voila!—instant porn. Most of us who’ve enjoyed doing this trick for our friends, and sometimes even in quiet places all by ourselves, felt warmer toward Native American women as a result. It did not encourage racial hatred; to the contrary, it made bagging a squaw look like a goal worth pursuing.

That will all come crashing to an end this year as Land O’Lakes is effectively murdering “Mia”—the name of the painted Injun maiden with the voluptuous kneecaps—and instead replacing her with a boring image of a tranquil lake. Supposedly it’s racist to make a Native American woman look more attractive and slim than they usually tend to be.

This makes us even sadder than we were when we learned that Iron Eyes Cody was Italian. If murdering “Mia” doesn’t constitute Native American genocide, what does?

VATICAN CENSORS POPE’S JOKE ABOUT WHISKEY BEING THE “REAL HOLY WATER”
We’ve kidded the Pope before—even questioned whether he’s Catholic—but every once in an Islamic crescent moon, he reminds us that he’s “human” just like the rest of us and likes to “cut loose” with “the boys” every once in a while, only to be stuffed back into a glass cage by his handlers.

“As the novel coronavirus eats its way across planet Earth, human nature shows no signs of improving.”

Scottish people are known for talking funny and drinking too much. As part of an upcoming documentary about a group of Scottish seminarians—sounds like a real humdinger—they filmed the young lads bequeathing a bottle of Oban malt to the Pontiff. According to the movie’s director:

We filmed the students meeting with the Pope in the Apostolic Palace. One of them was tasked with giving the Pope a bottle of malt, because they know he likes whisky. He was really down to Earth with them all and when they handed him the bottle, instead of just handing it to his assistant as he normally would with a gift, he held it up and said ‘Questa e la vera acqua santa’, which means ‘This is the real holy water.’

But once the surplice-wearing killjoys at the Vatican caught wind of the Pope’s comment, they insisted it be excised from the film as if it were a demon inhabiting Linda Blair’s body.

It’s gotta be hard being the Pope, so what’s so bad if he wants to get shitfaced every so often?

STUDENT ACTIVIST ACCUSED OF MAKING RACIALLY MOTIVATED THREATS AGAINST HERSELF
There have been so many hate-crime hoaxes over the years that the temptation is to believe that the general public now understands such fiascos are regular occurrences, but yea, we say unto you that we should not sleep at this late hour because such hoaxes constitute prolonged psychological warfare against the majority population and must be resisted with such ferocity that people will be too terrified to ever wrap a noose around their own necks and call themselves “nigger” again.

Anayeli Dominguez Peña is a 25-year-old former student of someplace called the University of La Verne, and judging from her mug shot, the only requirement for admission there is to be overweight. This week she will appear in court on felony charges of fabricating hate crimes against herself and her stupid radical student organization last year. Apparently she even placed a “backpack emitting smoke” into her own vehicle to make everything look extra-terroristic. She faces up to eight years in prison, where we at least hope she is able to lose some weight.

It’s likely that fewer than one in ten people can identify Indonesia as the world’s largest Muslim nation. In this hummus-slurping amalgamation of 17,000 islands straddling the Indian and Pacific Oceans, the only province that practices full-blown Sharia law is Aceh, which was struck particularly hard by 2004’s tsunami because God clearly isn’t a Muslim. It is in Aceh where the local imams say that public floggings must continue despite social-distancing rules related to coronavirus. At a recent public whipping—yes, they actually have them there, which immediately places Aceh on our bucket list—about a dozen rubberneckers watched four men each receive 40 lashes for drinking alcohol and an unmarried couple get caned for practicing carnal indiscretions in a motel room. If anyone has even a smartphone recording of this, please contact us. Let’s deal.

We recently covered the case of a rabbi who said COVID-19 was God’s punishment for homosexuality, only for the raging fag to come down with the disease. In other “should have kept your mouth shut, or we wouldn’t be gloating now” news, an Ohio man who called “bullshit” on the entire pandemic has died of this bullshit virus. John W. McDaniel, 60, responded on social media in mid-March to Ohio Governor Mike DeWine’s stay-at-home order thusly:

If what I’m hearing is true, that DeWine has ordered all bars and restaurants to be closed, I say bullshit! He doesn’t have that authority. If you are paranoid about getting sick just don’t go out. It shouldn’t keep those of us from living our lives. The madness has to stop….Does anybody have the guts to say this Covid19 is a political ploy? Asking for a friend. Prove me wrong.

OK, well, now you’re dead of COVID-19. What more proof do you need?

As unfortunate as it sounds, even the ancient Roman elders knew that a public that is numbed on intoxicants and sex is far less likely to riot. Sexual stimulation may have been the point of these stimulus checks after all. Never forget that at the end of the day, our rulers understand what animals we really are.

Everyone who knows how icy-cold Asians can be realizes that when China gets done with Africa, King Leopold will look like Mister Rogers by comparison. That’s why it comes as no surprise to hear that in China—the place where this new Chinese Virus originated—African migrants are complaining of discrimination and even a McDonald’s that has a sign reading “black people are not allowed to enter the restaurant.” Our only takeaway from this is to wonder how a native Chinese speaker would pronounce the English phrase “black people”—would it sound anything like what we imagine the Japanese pronunciation would be, which is along the lines of “brack peeper”?

Last summer we mentioned how Chris Cuomo tried to bully some New York douchebag at a bar, only proving what a mega-douchebag Cuomo is in the process. In his eternal quest to out-douche himself, Cuomo recently took to livestreaming from his own basement, claiming he was being quarantined from his own family due to testing positive for novel coronavirus. The “quarantine” was a hoax—Cuomo was found about a week ago rubbing elbows in East Hampton without a mask and referring to someone as a “jackass loser fat-tire biker” for being intrepid enough to ask about what happened with the whole “quarantine” shtick. Showing that he is clearly a member of a protected and insurgent La Cosa Nostra syndicate that threatens to hijack the US presidency if it is not stopped in its tracks NOW, Cuomo informed the chubby biker that “I can do what I want.”

Not in America, Fredo. You are surrounded on every side by jackass loser fat-tire bikers.