Today I Settle All Family Business 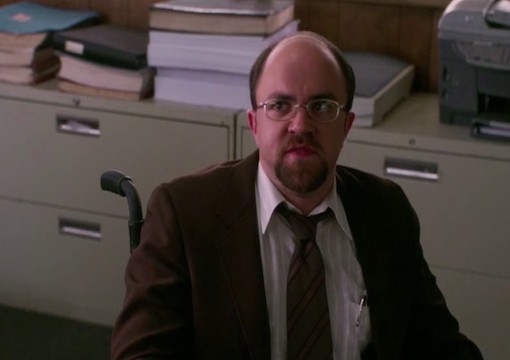 As this week’s column will run on the final day of the year, I thought I’d break format and do something a little different. People often ask me, “Dave, where do you get your story ideas?” Why, from my Mossad handlers, of course. But every now and then I manage to scrounge something up on my own, and every other now and then I encounter a story idea that I just can’t flesh out to a full column. And every year those unused stories go right into the ol’ dustbin. But not this year. In the name of Thunberg the Righteous, I shall recycle my waste into one final column of the twenty-tens. Starting with…

The Curious Case of the Crawling Cripple

This was a white whale I just couldn’t land. My friend Scott Rosendall is an accomplished actor. He’s also wheelchair-bound. Scott does okay for himself in a business where “appropriation” is off-limits except when it comes to able-bodied actors pretending to be handicapped (“capface,” as I like to call it). In August, Scott auditioned for a UnitedHealthcare commercial. The spot specifically called for actual crips, no pretenders. A rare opportunity for a guy like Scott.

But here’s the punchline: The commercial was scheduled to be shot on the top floor of a building with no elevators! The cripples would have to crawl up several flights of stairs if they wanted the job.

This is, of course, a gross violation of the Americans with Disabilities Act. You can’t offer work to the handicapped in a building they can’t access. Making it even funnier is the fact that the commercial was being shot by “social justice” advertising production company Tool of North America, best known for its “kiss cam” PSA featuring a Down syndrome gay couple kissing (can’t get more woke than that!).

Yet these “progressive” heroes literally told Scott and the other auditionees, “You want the job? Crawl, stumpy.”

Great story, huh? Major leftist production company caught breaking federal law. Except I could not get any of the involved parties (UnitedHealthcare, Tool, casting director Arlene Schuster-Goss, and ad agency Leo Burnett) to speak on record about the incident. All I had was Scott’s testimony, and that of his agent. So I handed off the story to a contact at Variety, who was similarly stonewalled. This is what happens when potential interviewees understand that their words might lead to a federal lawsuit. At least I can console myself that Variety was equally unsuccessful. Still, I hated to let this one go.

In July 2002, Samantha Runnion, a beautiful 5-year-old girl, was playing in the front yard of her home in Stanton, Calif., when she was kidnapped in broad daylight by a stranger, Alejandro Avila, who repeatedly raped her before strangling her and dumping her naked body in a forest. Avila came from a family of Mexican immigrants. His father was a convicted murderer, his brother was killed by members of his own street gang, and Alejandro had previously been charged with child molestation.

And who says Mexico doesn’t “send its best”?

Because Samantha Runnion was white, the L.A. Times became the advocate for the noble brown man charged with her murder (I mean, c’mon, she obviously asked to be killed, and Avila was merely doing a job Americans wouldn’t). Times “justice reporter” Tina Dirmann mocked the police for not having any evidence against Avila (when in fact they had tons of it).

Back in 2002, I asked Dirmann to explain why she claimed the cops had presented no evidence when in reality they’d held several news conferences detailing the evidence they had.

“In the name of Thunberg the Righteous, I shall recycle my waste into one final column of the twenty-tens.”

Dirmann: “Evidence can only be presented in a court of law. Since preliminary hearing and trial proceedings have not yet begun, we have not yet seen any evidence formally presented. That’s why the story reads the way it does. Police gather evidence, which gives them probable cause for an arrest, then take what evidence they’ve gathered to the DA, who will press charges and later present it in court. That’s how the system works. Hope that helps.”

A most disingenuous and condescending response, but I let it go. For seventeen years.

Last August, I was working on a piece about mainstream journalists who cover for nonwhite killers, and I thought it might be fun to contact Dirmann again to ask her to clarify her 2002 remarks. Dirmann happily agreed to reopen the conversation, so I asked her the following question:

I’ve always been puzzled by your response. You appear to be saying that, by the definition of evidence that you were using, investigators don’t “present evidence” and can’t “present evidence.” If that’s so, then why say in your article that they had “yet to present any evidence”? If they can’t…if, by your definition of evidence, only the DA and prosecutors can “present” evidence, and only at trial, why make the claim that investigators had not done something that, by your definition, they can’t do?

Dirmann’s “ask away” attitude abruptly changed. “I don’t feel comfortable commenting further,” she replied, adding that she had no recollection “at all” of the Runnion case. And why should she? She did her part (playing word games to cheerlead for an accused child killer), and she lost (Avila was convicted and is currently on el corredor de la muerte).

My exchange with Dirmann was too cumbersome to fit in my August piece, but I want it to see the light of day anyway. It’s an important reminder that the media is filled with hacks who devote their time to finding creative ways to defend nonwhites who thin the “privileged” herd.

Speaking of Whites, Let’s Overcharge Them!

In July, Detroit music festival “Afrofuture Fest” heroically stood up to the man by charging white patrons double price for tickets (whites $40, all others $20). The New York Times thought this was a superb idea. So much so that the paper assigned former Essence editor Derrick Bryson Taylor the job of penning a piece explaining why antiwhite discrimination is not only amazing, but legal. Taylor, in turn, interviewed Detroit civil rights attorney Tiffany Ellis, who confirmed that because the festival is private, it can discriminate away!

Tiffany Ellis, a Detroit-based civil rights lawyer, said private organizations have some leeway to choose who they are going to do business with and how they do that business. “We have constitutional rights as an individual, and the 14th Amendment provides that we cannot be discriminated against because all people are created equal,” Ms. Ellis said Sunday. “When it’s a private actor, those protections are different.”

Except, no. Not at all. Michigan has a law banning discrimination in any type of “public accommodation” (as does Colorado—that’s why that Christian baker keeps getting harassed). Is it really possible that an actual civil rights attorney in Michigan is unfamiliar with her state’s antidiscrimination laws? Or did the Times manipulate her words?

I emailed Ms. Ellis, who confirmed, “The part that didn’t make it into the story was when I told him (Taylor) that the legal challenges the organizers would have faced would be based on public accommodation law.” She invited me to chat about her experience with the Times, and yep, Taylor and/or the editors removed the part of her interview where she warned that such discriminatory pricing would run afoul of the public accommodation law.

A “paper of record” misrepresented the views of an attorney in order to present a false case for the legality of antiwhite discrimination, in an effort to bolster those who engage in it. I couldn’t build an entire column around that, but it’s a nice reminder of that outhouse rag’s priorities.

I knew in advance that my recent column excoriating that unique type of dimwit known as the Holocaust denier would attract a few trolls. But one troll in particular, though not worthy of a full column, nevertheless deserves a mention. A YouTube “redpiller” named Angelo John Gage decided it would be fun to troll me on Twitter. Curious about the identity of this minor nuisance, I checked out his channel and watched a video detailing why, in his opinion, denial is the only intelligent way to look at the Holocaust. Gage explains that if you haven’t seen and experienced something for yourself, you can never truly know it happened. Therefore, we must remain “agnostic” about all historical events that we did not personally witness. He provides Julius Caesar as an example. Since Gage “never met him,” maybe he existed, maybe not.

Hallelujah! I never thought I’d encounter a Holocaust denier oblivious enough to explain his craft so clearly. Yes, Holocaust denial is the outright rejection of the idea that humans can ever know anything about history. It’s a rejection of historiography as a field, and of evidence as a concept. This is how deniers are mentally able to dismiss the wealth of contemporaneous documents proving the 1941–1943 Jewish extermination program: “I wasn’t there, so therefore it’s unknowable.”

Of course, why limit that to the Holocaust? Don’t we have to be equally “agnostic” about Stalin’s mass murders? And Mao’s? Gage rants about the USS Liberty, but he wasn’t there for that. Where’s the agnosticism? And why stop at history? The criminal justice system is based upon judgment by twelve people who “weren’t there” for the event in question. Surely that must end. That white girl “murdered” by black teens in the park in NYC…I didn’t see it happen, did you? No? Then stop talking like it did.

Finally, a denier self-diagnosed his own pathology. No drivel about deniers being “investigators” trying to “find the truth.” Deniers dismiss not only the truth of the Holocaust, but the very concept of truth itself.

A few days ago, Gage pulled the video, so I can’t link to it. Redpiller redpilled himself, and then memory-holed himself.

Late in Time Behold Him Come

Back in August, I railed against the right-wing morons who were attempting to cancel the conservative-friendly action film The Hunt. The morons won, and the film was shelved. I revisited the issue in my Dec. 24 column, and the next day—Christmas Day—Mike Cernovich tweeted: “One of the dumber things I did in 2019 was fall for the conservative outrage over The Hunt. What a stupid thing. My apologies to (producer) Jason Blum and others.”

Cerno must have been visited by four spirits on Christmas Eve, to have undergone such a dramatic change of heart.

Some folks read my column, others hear it secondhand from ghosts.

Regardless, a Happy New Year to you all.