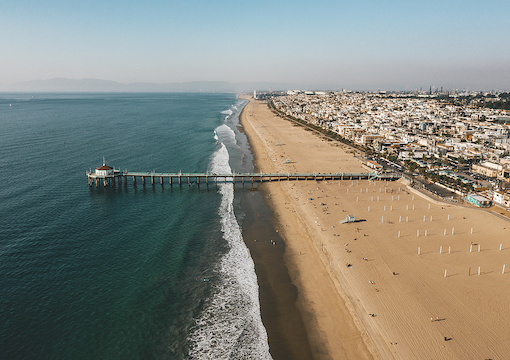 As I’ve been known to point out, the “equity” that the all-conquering Diversity-Inclusion-Equity (DIE) crusade truly wants is your equity in your home. Current developments in Evanston, Ill., and Manhattan Beach, Calif., are starting to give us a sense of how today’s increasingly antiquarian white guilt will be leveraged into sizable handouts over supposed injustices in the distant past.

We live in an era bizarrely obsessed with real estate transactions of increasingly remote generations. For example, Amazon’s new TV series Them is about the horrors at the hands of whiteness faced by blacks moving to Compton, Calif., in 1953. For example, the first episode “Covenant” is about the supernaturally sinister power of restrictive covenants, which were abolished in 1948, but their bad juju powers live on, or something.

In reality, of course, blacks turned Compton, which had been a nice enough suburb of Los Angeles that in 1949 it was home to two future presidents of the United States, into the crack murder capital of the world in the NWA era. The Los Angeles Times reported in 1992:

When George and Barbara Bush lived in Santa Fe Gardens, the sprawling apartment complex in Compton provided clean, affordable housing within minutes of downtown Los Angeles and the Long Beach Harbor…. Now Santa Fe Gardens is a dull-brown maze of boarded windows, squatters and fear. Crack cocaine, gunfire and prostitution are all too familiar, residents say.

Like Yogi’s Berra’s former favorite restaurant, Compton got so popular with blacks that they don’t much live there anymore, with the majority of Compton’s residents now Latino. But, as we are taught, all that Compton history has to be the fault of white people because black people are above criticism and beneath agency.

“We live in an era bizarrely obsessed with real estate transactions of increasingly remote generations.”

In real life in fairly nearby Manhattan Beach, which is a fitness-oriented suburb of L.A. popular with National Hockey League players and other frequent fliers, Los Angeles County unilaterally decided to revisit a 1929 eminent domain judgment it had won and return county-owned beachfront property now worth tens of millions to the descendants of a black couple who had bought the property in 1912.

The theory behind the giveaway appears to be, first, that eminent domain was used on the black resort for racist reasons 92 years ago. Perhaps that’s true, but the events seem lost in the mists of time, with politicians moving precipitately.

Second, that the black owners would have held on to the property nonstop until the present. But huge numbers of people who owned property in 1929 lost it in the Great Depression.

Others sold their land later because they wanted the money now. For example, my wife’s Air Force colonel uncle sold his ranch house in Manhattan Beach’s neighbor Torrance in the 1960s when he was transferred to Edwards AFB even though his shrewd father advised him to do whatever it took to hang on to what would someday be a gold mine.

But he needed the money.

Typically, blacks tend to be even worse at buy-and-hold investing than the rest of us, in part because they have a harder time resisting the lure of spending. So they need the money, now.

Third, that a large black presence would not have driven down property values in Manhattan Beach like it did in Compton, that the reason black neighborhoods are relatively cheap is not because of crime and disruptive students but because whites stole all the magic dirt and forced blacks to live on the tragic dirt.

In the case of Manhattan Beach, land next to the Pacific really does have superior intrinsic value. (Although, judging by the crackerbox houses originally built on it, for a long time few seemed to recognize that, probably due to pre-penicillin fears that ocean fogs would induce tuberculosis.) But Compton, while lacking a beach, also has nice weather and is close to LAX.

Fourth, that with Bidenomics endorsing the “Money Printer Go Brrrrrr” theory of prosperity, we can easily afford to give away money willy-nilly to representatives of today’s favored races in response to their tales of ancestral grievance.

Of course, eminent domain has a long and often shady history. Besides corruption, a general problem has been that the government typically pays what willing sellers would take for their property, but not the premium over fair market price that would persuade property owners who are unwilling at present to leave to come to the table. (Some states now pay a premium over market price to compensate for this.)

But this new principle that ancient eminent domain decisions should be reopened if the dissatisfied owners were members of today’s privileged groups seems like a giant can of worms.

Indeed, most people have stories of their ancestors who used to own what is now vastly valuable property. For example, in 17th-century New Amsterdam, the late anthropologist Henry Harpending’s Dutch ancestors owned a farm on Wall Street. But it slipped out of the Harpending family’s hands in the tumult of Manhattan’s takeover by the English.

Henry was a great guy, so I’m all for giving Wall Street to his heirs. Yet, we have an elaborate system of property law that’s intended to make very clear who owns what, so that the Harpendings can’t just show up at the 927-foot Trump Building at 40 Wall Street and take their farm back. The U.S. has prospered through certainty of title, while Latin America, as Peruvian economist Hernando de Soto noted, suffers economically from its vagueness over who owns precisely what. (Note: Poor people do not benefit from Latin America’s lack of clarity.)

Likewise, the “reparations” scheme in Evanston is based on today’s popular assumption that blacks failing to get rich off real estate couldn’t possibly have anything to do with poor decision-making or bad behavior by blacks. Therefore, it’s your fault and you must pay.

Evanston is a suburban college town, home to Northwestern U., just north of Chicago on Lake Michigan. It’s extremely liberal, with Biden carrying 90 percent of the vote.

Unlike Manhattan Beach, Evanston has some of the grandest old houses in America along Sheridan Road. The white students in Evanston’s public schools score the highest in the U.S. on achievement tests.

Wealthy liberal college towns like Evanston and Madison, Wis., tend to be particularly bad for blacks because of all the welfare available to subsidize their worst tendencies.

The new law in Evanston sets aside the first $10 million in sales tax on legalized marijuana.

Personally, I think diverting sales tax on marijuana is the wrong way to aid African-Americans. Instead, give them a monopoly on retail weed sales like American Indian tribes get a monopoly on casinos. But unlike with gambling, don’t let blacks subcontract the work out to experts the way that Koreans now own most of the weave shops in the U.S. (which are currently being looted in Minnesota: #StopAsianHate). Instead, require blacks to operate their own businesses. If they do a poor job of it, what’s the worst that could happen: Americans would be less stoned?)

The initiative aims to address past discriminatory housing policies that have impacted Black people by allowing eligible residents to receive up to $25,000 to put toward mortgage and down payment assistance, home improvements and more. People who qualify for the money must have Black ancestry and have been an Evanston resident between 1919 and 1969, or a direct descendant of an individual harmed by discriminatory housing policies or practices during this period. Those who faced housing discrimination related to city policies or practices after 1969 are eligible, too.

What’s the significance of 1969? The Fair Housing Act of 1969 outlawed redlining and other forms of discrimination.

So, the premise of Evanston’s first reparations law is that while there hasn’t been redlining or housing discrimination in Evanston for 52 years, the marketplace has somehow failed since the 1960s to rectify previous irrational discrimination against black homeowners.

In reality, if the New Deal’s thirty years of redlining had held back black prosperity out of irrational fears that blacks weren’t good for property values, then the more than half a century since the 1960s should have seen black property values shoot up.

Well, sure, there have been a few bubbles since then, such as 2004–2007, which was exacerbated by George W. Bush’s Increasing Minority Homeownership crusade, and the almost forgotten bubble that immediately followed the 1968 act and destroyed much of Chicago. Liberal journalist Alyssa Katz wrote in her 2008 book Our Lot: How Real Estate Came to Own Us:

In 1972, in Chicago and in every other city in the nation, almost anyone could get a home mortgage, including borrowers who didn’t earn enough to pay them off, on just about any house, for any reason…. The FHA was now, in effect, a front in the War on Poverty…. Under the new regime, homebuyers living in Chicago and other inner cities weren’t just eligible for loans. Lenders who signed up to sell FHA-insured mortgages were asked to do everything they could to make sure the buyers got them.

Across the country, neighborhood destruction became a booming business, financed by the federal government. In Chicago they called it ‘panic peddling.’ In New York, it was ‘blockbusting.’… The FHA-insured loans threw gasoline on that smoldering fire…. Indeed, the insurance made it profitable to seek out the most impoverished and unreliable borrowers, since the sooner a borrower defaulted on a loan, the more quickly the lender would get paid back in full by FHA.

Many of the neighborhoods that integrated in this era have never recovered. For example, the Austin neighborhood on the West Side of Chicago, where my in-laws lost half of their net worth in three years by trying to make integration work, has seen its population drop by 25 percent. Today, Austin is 4 percent white, with many houses being abandoned and bulldozed. Its murder rate per 100,000 rose from 55 in 2019 to 80 during the racial reckoning of 2020, worse than Baltimore or Detroit.

Right across Austin Boulevard in Oak Park, Ill., the city fathers saved Ernest Hemingway’s beautiful hometown of wide lawns and narrow minds in the 1970s by imposing a surreptitious black-a-block racial quota on predatory Realtors, allowing them to sell to only one black family per block, thus slowing white flight. That might be the best idea any town has come up with yet for helping integration succeed, but virtually nobody knows about it because it was likely illegal under the 1968 law.

It’s almost as if the now-reviled FDR knew what was better for blacks: Because underclass blacks are bad for property values, it makes sense for them to rent rather than to buy.

But the big money is in home equity, so that’s what the equity activists are increasingly focusing on: getting their hands on your equity.