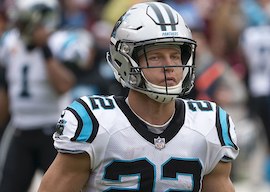 The Carolina Panthers’ speedy running back Christian McCaffrey, who is second in the NFL with 105 yards rushing per game, is bidding to become the first white player to lead the NFL in rushing since Jim Taylor of the legendary 1962 Green Bay Packers 57 years ago.

McCaffrey’s 2019 performance shouldn’t be surprising. He was third in the NFL last year in combined yards from scrimmage with 1,098 rushing and 867 receiving, while at Stanford he was runner-up for the 2015 Heisman Trophy.

Despite McCaffrey’s fame, this year’s Madden videogame depicted him as black. After all, game-breaking NFL backs (McCaffrey has scored ten touchdowns in his first seven games) are virtually never white.

His witty mom, Lisa, tweeted in response to her son:

Sorry you had to find out this way. @87ed may not be your real dad.

As his father Ed had done to Booker, Christian relegated a more famous name to the bench at Stanford, starting in front of Barry Sanders Jr. Christian broke the NCAA record for most all-purpose yards in a season held by his backup’s dad, the great Barry Sanders.

Christian’s speed wasn’t inherited just through his father’s bloodline. His mother was a star soccer player at Stanford.

And her father, the late ophthalmological surgeon Dr. Dave Sime, was the last white American to medal in the Olympic 100-meter dash, the race to determine the world’s fastest man. In 1960, Sime won silver, missing out on gold to a West German in a photo finish.

So Christian’s speed shouldn’t come as a surprise. As his mother joked to Sports Illustrated in 1998:

“That’s why Ed and I got together. So we could breed fast white guys.”

There’s nothing terribly controversial about suggesting that hereditary genetics play a role in Christian McCaffrey’s football success. (Of course, nurture as well as nature helps: His clan has been an expert and diligent follower of sports-science advice for three generations.)

“Essays like this one reflect the common assumption that the reality of racial differences must be covered up from the public to prevent mass violence.”

But, in the Current Year, many people suffer the kind of brain shutdown that Orwell called “crimestop” when it is suggested that some of the same hereditary reasons the McCaffreys and Dibabas are fast might also help explain why, on average, blacks tend to run quicker than whites.

Similarly, the abundant data suggesting that individuals of sub-Saharan ancestry enjoy genetic advantages at other professions requiring running speed, such as playing NFL cornerback or Olympic sprinting, can lead to Orwell’s “protective stupidity” among those claiming the authority of Science.

For example, it’s considered fine to suggest that the reason that each new Dibaba is fast is due to their shared genetics. But to say that one major reason Ethiopians keep winning Olympic running medals (now up to 54, but none at any distance shorter than the 1,500-meter metric mile because Ethiopians lack sprinting ability) is due to their shared genetics is thought unthinkable.

For example, last week four academics of middling repute issued a set of talking points in the popular Race Is Not a Biological Category genre entitled “Race, genetics and pseudoscience: an explainer.” Citing no data other than their own authority, they asserted:

Research in the 20th century found that the crude categorizations used colloquially (black, white, East Asian etc.) were not reflected in actual patterns of genetic variation, meaning that differences and similarities in DNA between people did not perfectly match the traditional racial terms.

In our sublunary world, few things “perfectly match” our terms. But a less intentionally misleading statement would be:

Research in the 21st century found that the crude categorizations used colloquially (black, white, East Asian etc.) WERE reflected in actual patterns of genetic variation, meaning that differences and similarities in DNA between people did more or less match the traditional racial terms, although not perfectly.

If the authors had possessed the courage to challenge superstar geneticist David Reich of Harvard, who has emerged in this decade as the most productive researcher into race, ancient and modern, the Middling Four could at least have made their essay less boring.

But as a geneticist I also know that it is simply no longer possible to ignore average genetic differences among “races.” Groundbreaking advances in DNA sequencing technology have been made over the last two decades. These advances enable us to measure with exquisite accuracy what fraction of an individual’s genetic ancestry traces back to, say, West Africa 500 years ago—before the mixing in the Americas of the West African and European gene pools that were almost completely isolated for the last 70,000 years. With the help of these tools, we are learning that while race may be a social construct, differences in genetic ancestry that happen to correlate to many of today’s racial constructs are real.

Granted, tangling with David Reich, as overconfident science denialist Angela Saini tried to do (with amusing results), is not a prudent strategy. So, the four authors, Ewan Birney, Jennifer Raff, Adam Rutherford, and Aylwyn Scally, have instead aimed their “explainer” at debunking unnamed but clearly evil wreckers:

Amidst this ongoing surge of new information, there are darker currents. A small number of researchers, mostly well outside of the scientific mainstream, have seized upon some of the new findings and methods in human genetics, and are part of a social-media cottage-industry that disseminates and amplifies low-quality or distorted science, sometimes in the form of scientific papers, sometimes as internet memes—under the guise of euphemisms such as “race realism” or “human biodiversity.”

Their essay is representative of most conventional wisdom on the topic of human biodiversity in that it’s boring and uninformative. No names are named, no citations included, and virtually no examples given. It mostly consists of assertions that you are supposed to take on their (middling) authority.

In contrast, I tend toward the exact opposite writing style. I may not convince you of my ideas, but I’m going to provide you with a lot of data and examples. The human world is an interesting place, although you wouldn’t know that from reading “Pseudoscience.”

I pointed out on Twitter that it’s hard to reconcile the current dogma about race not being a biological reality with what we see in sports, such as each of the last 72 finalists in the Olympic 100-meter dash going all the way back to 1984 nine Olympics ago being at least half sub-Saharan in ancestry.

The Middling Four were not amused. Scally tweeted dismissively:

Olympic medals are second only to nobel prizes as a really bad starting point for thinking about human genetics.

When numerous people pointed out data inconvenient to his theory, he complained:

Lol, my timeline is now just a hosepipe of shite about black people winning the 100m sprint.

Birney assumed I was arguing that genes for dark skin color make you a faster runner:

It would be speculation about the links to skin pigmentation loci to 100m running ability – it’s not obvious that they *should* be linked, but biology is weird, and we don’t have data. I wouldn’t take the 100m Olympic final as way to answer this question though.

If you’ve actually thought about the subject, you’d know that there are also lots of dark-skinned people in South Asia, but South Asians are perhaps the least athletic people on earth. The last person born in India to win an Olympic running medal appears to have been Englishman Norman Pritchard in the 1900 Games.

Birney was offended by the idea that we could learn anything about genetics from the Olympic 100-meter dash. Think of the tiny sample size!

Actually, the sample size is fairly close to every man on earth. By age 12, 99 percent of boys know some other boy who is a faster runner than them. The 1 percent who don’t keep competing at running until they meet somebody they can’t ever beat. This process goes on and on until, finally, there are eight black guys lined up in the Olympic 100-meter dash final. The gun goes off, and a little under ten seconds later Usain Bolt wins and goes on to make $100 million in endorsements.

Birney was even more offended when I pointed out that if you don’t think running speed correlates with sub-Saharan ancestry, just look at photos of top sprinters like Bolt and Carl Lewis and distance runners like Eliud Kipchoge, who just ran 26.2 miles in under two hours. They are almost all quite black. Birney responded:

For (b) using skin colour to genotype people is about 30-50 odd loci around the genome, out of a notional need for about 300,000. Looking at people is just plain madness as a genotyping strategy.

In reality, I look at people all the time to get some sense of their ancestry. You do too.

For example, in 2016, The New York Times declared Sen. Marco Rubio, who is of Cuban descent, to be “not white.”

“Is that true?” I wondered. So, I scanned hundreds of photos of Rubio online. Judging from his looks, there was a sizable chance he was 100 percent white, but there was also a good chance he was very slightly Amerindian and/or black. So then I dug up pictures of his parents and siblings. On average, they looked a little less white than Marco does, so I concluded he probably wasn’t 100 percent white.

In 2019, Rubio went on Henry Louis Gates’ Finding Your Roots TV program and had his DNA scanned. He came out:

Likewise, if you don’t believe that looking at a photo of Carl Lewis, the greatest American sprinter, can tell you much about his ancestry, you can also look at pictures of his relatives. Both of his parents were respected athletes and coaches, as was his sister Carol Lewis, a three-time Olympian. They all look quite black.

Sub-Saharan blacks are, like all racial groups, a large extended family.

They are a race because they tend to be more related to each other than to people of other races. A racial group is just an extended family that has more endurance and cohesion than a simple extended family because it has some degree of inbreeding.

The term “inbreeding” tends to freak out Americans, but it’s simply a mathematical inevitability for every long-enough-lasting extended family. Icelanders, for example, have largely been marrying other Icelanders for the past 1,000 years, or roughly thirty generations. Back thirty generations there would be over one billion open slots to fill in an Icelander’s family tree, but there have never been even a million people in Iceland. So, lots of ancestors of present-day Icelanders did double duty.

As Reich points out, sub-Saharans have largely been reproductively isolated for 70,000 years, or more than 2,000 generations.

This fundamental relationship between family and race is often overlooked. As Charles Darwin explained to T.H. Huxley in 1857, surface features such as color aren’t the essence of species or race, they are simply clues to what is more essential: genealogy. Contra Birney, Darwin explained:

Generally, we may safely presume, that the resemblance of races & their pedigrees would go together.

Strikingly, in horse racing, where the pedigrees of each thoroughbred are fully documented for at least a dozen generations, nobody much cares about color in forecasting which horse will prove fastest. That’s because bettors know everything about horses’ genealogy.

Essays like this one reflect the common assumption that the reality of racial differences must be covered up from the public to prevent mass violence.

In reality, however, most everybody who watches sports on television has already noticed the obviousness of racial diversity in genetic propensities and, rather than going out and waging genocide, has instead gone to the fridge and gotten another beer.