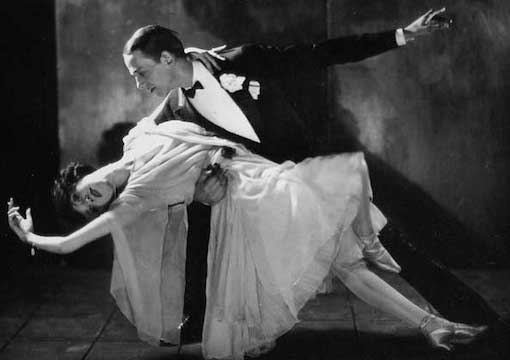 During the dog days of August, there was a brief flurry of partisan excitement when Republican congresswoman Lauren Boebert denounced the White House’s student loan giveaway as, “Joe Biden is robbing hardworking Americans to pay for Karen’s daughter’s degree in lesbian dance theory.” In response, Bill Kristol tut-tutted that complaining about “‘Lesbian dance theory’ adds that frisson of bigotry that really excites your basic semi-fascist.”

It struck me, however, that I, being me, actually have a lesbian dance theory.

Namely, my theory is that lesbians, like straight men, don’t much like to dance and aren’t that good at it, while gay men and straight women tend to adore dancing.

“The 1960s fashion for free-form non-touch dancing was a disaster for American culture that we haven’t recovered from yet.”

This pattern is the mirror image of golf, which is why the big Ladies PGA tournament in Palm Springs each March is known as the “national lesbian spring break.”

Way back in my 1994 article “Why Lesbians Aren’t Gay,” in which I enumerated dozens of behavioral differences between gay men and lesbians, I listed under “Bar Activity” that gays like to dance, while lesbians shoot pool.

Others have noticed as well that lesbians don’t tend to be the most graceful dancers. In one of country singer Kinky Friedman’s detective novels, the protagonist lives in a basement apartment in Greenwich Village under the rehearsal space of a lesbian dance troupe, exposing him to the incessant “semi-rhythmic thudding” of the sapphists.

Research has since vindicated my observations. For example, a 1997 survey of 136 professional dancers found a consensus that over half of the men in the field are gay, while lesbians are rare.

More generally, a 2005 meta-analysis of nearly 10,000 subjects found that lesbians tended to be most like straight men on a self-ascribed masculinity-femininity scale and also in terms of gender-related interests:

In the 28 years since I wrote “Why Lesbians Aren’t Gay,” lesbian bars have largely gone extinct. Estimates of the number of lesbian bars left in the country range from 19 to 22. In sharp contrast, circuit dance parties are so massively popular among gay men in 2022 that they’ve helped turn monkeypox into a global health crisis.

One sinister reason for the decline in lesbian bars is the semi-genocide of lesbians going on during World War Trans as America’s tomboys and homely girly girls are encouraged by our insane culture to poison, mutilate, and sterilize themselves into pseudo-men.

Lesbian feminist academics played such a large role in spreading the social constructionist dogmas that are now being used so damagingly against lesbians by the trans movement that it’s hard not to be amused by their being hoist by their own petard. Of course, what is replacing lesbians is even more destructive.

Also, with the rise of heterosexual ex-men in dresses to the top of the victimist totem pole in recent years, a longtime annoyance for lesbians socializing—men in dresses hitting on them while they’re just trying to watch the ball game—has become a much worse problem. Now kicking out the ex-men demanding to have sex with the lesbian customers will instantly bring crushing charges of “transphobia.”

But yet another reason that about 90 percent of the lesbians bars in America have closed over the past 30 years is that lesbians don’t care much for dancing, and are much less promiscuous than gays, so they don’t need as much to gather physically in the internet era.

An interesting question raised by my lesbian dance theory is whether masculine toleration of dancing can ever be socially reconstructed? Is there any way to get straight men back on the dance floor?

The male aversion toward dancing that has been so prevalent in America in my lifetime is not representative of the whole world today or even of America in the past. Huge numbers of men dance well in Latin America and in Eastern Europe. If you are an Austrian lad, you know how to waltz.

Even American men were once pretty good at dancing. Around 1950, the two most famous dancers in the world were likely Fred Astaire and Gene Kelly, and that was not a fluke. Mid-century Americans danced all the time.

As strange as it sounds at present, in the 1950s my father, a socially awkward Lockheed engineer, owned his own tuxedo for regularly taking my mother dancing at the Ambassador Hotel on Wilshire Boulevard.

Back then, America invested heavily in teaching dance steps to boys, so a sizable fraction of the male population eventually achieved some minimum level of competence at leading a woman around the dance floor without stepping on her toes. This made American girls’ lives more fun.

Granted, boys didn’t like taking dance lessons then any more than they do now. Dave Barry recalls his at age 11 around 1958:

When the dance class started, the enemy genders were lined up on opposite sides of the cafeteria…. After we boys had thoroughly failed to master these dances, the instructor would bring the two lines together and order the boys to dance directly with the girls, which we did by sticking our arms straight out to maintain maximum separation, lunging around the cafeteria like miniature sport-coat-wearing versions of Frankenstein’s monster.

But then along came the ’60s, which was an era of Guy Liberation as young men protested against whatever the older generation had meekly put up with, whether the draft, marriage, haircuts, or dance lessons. No longer did you have to shackle your creativity on the dance floor by learning steps; you just stood a few feet away from the girl and moved around however you felt.

The 1960s fashion for free-form non-touch dancing was a disaster for American culture that we haven’t recovered from yet.

One reason the types of dancing that had served white American men adequately for generations fell out of fashion in the 1960s was the rise in prestige of African-American culture. Some cite Chubby Checker’s immense hit “The Twist,” which was No. 1 in both 1960 and 1962, as the point at which dancing changed permanently in America.

Blacks tend to be good at making up dances on the spot. Perhaps that is because improvisational male sexual display is fundamental to sub-Saharan cultures in which women do most of the farm work with hoes so they choose the man who delights them most.

In contrast, whites emerged from economies in which men did the heavy farm work with plows, so men weren’t expected to be as entertaining to women. Their role on the dance floor was more to show that they could be good providers by learning the steps, practicing them diligently, then confidently leading the woman through the dance.

But that went out of fashion over the course of the 1960s. And yet, despite the huge changes in attitudes, white men never did become as good improvisational dancers as black men.

Instead, they mostly just danced less.