Our New Religion of Race 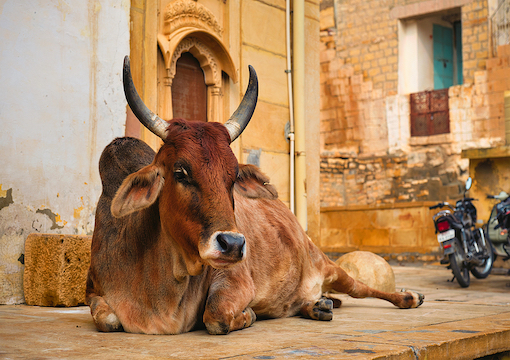 But America in the era of George Floyd (may he rest in power) appears to be inventing a new religion of race.

In accordance with our culture’s declining intellectual prowess, our new creed is a very simple faith, with one black-and-white dogma:

Blacks are best and whites are worst.

Everything else follows inevitably. For example, whites are sinners and must be disciplined, while blacks are saints and must be indulged.

As you may have noticed, the spelling of the word “black” has recently been subjected by the mainstream media to “reverential capitalization,” much as in Victorian translations of the Bible, pronouns that refer to God were capitalized.

The point of newspapers now capitalizing “Black” but, pointedly, not “white” is to make clear that blacks are of a higher caste than whites. An Aryan conqueror in ancient India would have immediately understood the purpose of the symbolism.

India now, by the way, has millions of stray sacred cows roaming the streets, causing traffic accidents and devouring crops. (In case you are wondering where sacred cows come from, they are elderly animals that have stopped giving milk. Increasingly, laws in India ban their slaughter, so dairy farmers take them at night to somebody else’s neighborhood and turn them loose.)

In the past few years, Hindus of the higher sort of castes have become even more obsessive than normal about protecting bovine rights, with vegetarian vigilante mobs lashing out violently at Untouchables, Muslims, and Christians for disrespecting cows. Cow Lives Matter!

Here in America, blacks are currently being reconceptualized as no longer our fellow citizens but now as our own sacred cows, entitled to wander wherever their whims lead them with nobody daring to tell them no.

An amusingly literal manifestation of this trend was the outpouring of antiwhite hate and guilt in Los Angeles this month when a black stuntwoman-actress named Alex Marshall-Brown planted her blanket on the private lawn of St. Paul’s First Lutheran church and school in North Hollywood, Calif., and began painting her toenails.

She could have had all the room to sit that she wanted if she’d walked across the street to the spacious North Hollywood Park (the park where John Cusack holds up the boombox in Say Anything…).

Instead, she began her publicity stunt on the private lawn and then began videoing the reaction she instigated.

Not surprisingly, St. Paul’s workers did not want anybody spreading a blanket on their grass, because a blanket serves as a flag to the many homeless of the NoHo entertainment district that this property has been colonized and is now open for their occupation.

When the attention seeker repeatedly refused to leave the church’s grounds, saying that she didn’t see a “No Trespassing” sign, one church worker eventually nailed a sign to a tree. She egged him into uttering on camera the unholiest words known to the contemporary mind:

“Ma’am. We have to treat everybody the same. All lives matter.”

A Black woman sat on the grass outside an L.A. church. The cold welcome she recorded speaks volumes

In contrast to the virtuous Black, Lelyveld castigated the wicked whites for not fully foreseeing their fate and thus falling into her trap:

…That their shameful behavior, which she soon would post on Facebook, might rapidly spread across social media and go viral seems either not to have occurred to or not to have bothered the white church members she filmed.

In reality, preschools like St. Paul’s are extremely concerned about losing control of their property and thus attracting Aqualung-type men “eyeing little girls with bad intent.” As the L.A. Times complained:

Marshall-Brown, wondering who had made the first call [to unarmed security guards whom the intruder had refused to heed], then noticed women in the windows of the church’s preschool across the street, clearly monitoring her without looking at her directly…. Each time I watch the video, that realization hits me like a gut punch—that these people from a church were dehumanizing her….

After all, who cares about the safety of little girls these days compared with the suddenly sacrosanct right of a black adult to trespass without any nonblack objecting?

The church members threaten to bring in the police and show no compunction about the potential danger that could come from doing so.

This is a growing doctrine: Because the police, as we all know, constantly slaughter blacks out of their unfathomable racist hatred, white victims of black lawbreaking should abstain from calling law enforcement. For instance, The New York Times reported in June:

Blocks from where George Floyd drew his last breaths, residents have vowed to avoid the police to protect people of color.

A Minneapolis white man told the newspaper that he was ashamed of calling the police after two black youths held a gun to his chest and demanded his car keys:

“I regret calling the police. It was my instinct but I wish it hadn’t been. I put those boys in danger of death by calling the cops.”

In effect, by declaring blacks to be above the law, American elites are suddenly subscribing to a blacks-only version of Satanist Aleister Crowley’s teaching:

“Do what thou wilt shall be the whole of the Law.”

Why has America succumbed to black worship at a time of high unemployment?

As L. Ron Hubbard likely said to his fellow science-fiction authors in the 1940s, “Writing for a penny a word is ridiculous. If a man really wanted to make a million dollars, the best way to do it would be to start his own religion.”

But the new belief isn’t, like Scientology, a mere cult. Instead, it’s rapidly becoming the official ruling-class religion of the United States.

Not coincidentally, it provides an ever-growing number of sinecures for its priestly caste of Diversity Inclusion Equity (DIE) staffers.

Because the empirical evidence that, relative to whites, blacks are saints is less than abundant, this theology provides plenty of employment for heretic hunters. Any white person could slip up at any moment and blurt out the truth: that what we are supposed to take on faith is a hoax. Hence, America’s institutions must hire many, many white-collar witch sniffers.

What religion could be more rational than that?