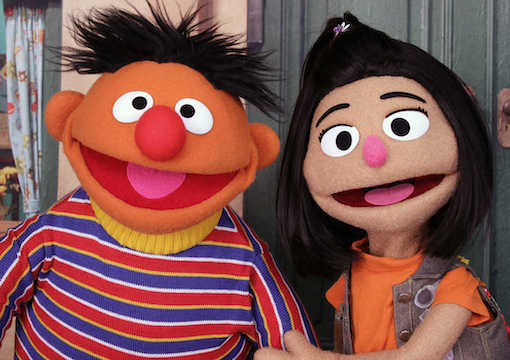 The Week’s Most Jittery, Glittery, and Skittery Headlines

SESAME STREET’S SLIPPERY SLOPE
“The eyes are the window to the soul.” No two people agree on where that phrase originated. Some say the Bible, others say the ancient Greeks, while others say the “where’s the beef” lady. Some even point to Shakespeare, who in his Sonnet No.1 (not to be confused with his Mambo No. 5) wrote:

But thou contracted to thine own bright eyes,
Feed’st thy light’s flame with self-substantial fuel.

Sadly, the next verse is:

Within thine own bud buriest thy content
And, tender churl, makest waste in niggarding.

This unfortunate choice of words got Shakespeare canceled. He lost his Forever 1621 neck ruff endorsement deal, and the Old Vic banned him for racial insensitivity (oh, wait—that was Terry Gilliam).

But wherever the “eyes are the window to the soul” phrase originated, the simple wisdom of it is taken these days as a basic truism. Except at PBS, where eyes are nothing more than $1 plastic novelty items glued to a piece of felt in exchange for $465 million in taxpayer money.

Last week, Sesame Street debuted it’s first-ever “Asian Muppet.” Though lauded in the press, “Ji-Young the Korean Muppet” has drawn flak for the fact that “her” eyes are as round as those of every other Muppet. This wouldn’t be a big deal had Sesame Street not produced a special back in July aimed at making Asian kids proud of their “unique eyes.”

“Be proud of those slanty peepers, Asian kids. But don’t expect to see them on a Muppet because, well, they look kinda sneaky.”

Nearly half a billion tax bucks to produce a show that tells Asian kids “be proud of your eyes,” only to then create an “Asian” Muppet with eyes like Betty Boop.

RETURN OF THE “TEXANS”
Regular readers will remember the story of the brunching “Texans” who beat the living snot out of an Asian hostess at an NYC eatery in September after being asked for proof of vaccination. At first, blue Twitter erupted in an outrage-fest of fury: “Those damn MAGA Texans! Anti-vax WHITE SUPREEEMACISTS!”

And then security camera footage revealed that the “Texans” were actually a gaggle of weave-wearing booty-shaking black ghetto-girls.

As just like that, the “violent anti-vax Texans” story vanished faster than a speeding Alec Baldwin bullet.

And now the yellow cornrows of Texas have popped up once again. And, once again, Twitter pounced a bit too soon.

Last week, a Southwest attendant on a Dallas–to–New York flight was assaulted by an unruly female passenger.

An unruly Texan? Must be them dern MAGAs!

Leftist activist “View From The Watchtower” tweeted “Radicalized republicans use Southwest Airlines because Southwest chooses to allow pilots to make right wing jokes on the intercom and not get vaccinated.”

When the Daily Beast tweeted the story, responses included:

“Disgusting. We know who she voted for and what this was about for sure. Horrible horrible f’ing people.”

“These MAGA buffoons are a danger to all.”

“Almost surely a maga chud. They think they have permission to attack anyone who they think is trying to ‘control’ them and they’re not going to stop anytime soon.”

And then the passenger’s photo was released: 32-year-old Arielle Jean Jackson, a most non-MAGA black woman.

Her reason for assaulting the flight attendant isn’t known, but it likely had something to do with Emmett Till and slavery.

With the publication of the photo, the story stopped trending on Twitter.

HOW DERRIERE YOU
If you thought last week’s news about Joe Biden turning the U.N. climate summit in Glasgow into his own personal gas chamber was the most entertaining thing to come out of that ridiculous waste of time, think again. It turns out Zyklon B(iden) wasn’t the only one befouling the air.

According to The Scotsman, so much carbon was pumped into the atmosphere from the participants’ private jets, the event was “the most polluting summit of its kind.”

An anti-pollution summit was the most polluting summit in history. If only late-night comedians still did comedy, that would make for a fine joke.

One may wonder why the summit wasn’t conducted via Zoom. Well, the simple answer is, there’s just no way to remotely replicate the in-person experience of having Greta Thunberg say “how dare you” to your face. Zoom just can’t capture the intensity of the throbbing veins and flaring nostrils.

And speaking of Thunberg, on the closing day of the conference, Indian newswoman Sadhika Tiwari, writing for the Hindi news site The Quint (which specializes in finding sharks for three thousand bucks but catching and killing them for ten), gently castigated the young dare-ess for failing to understand that the emissions cuts she demands will actually kill Indian children. Tiwari pointed out that abandoning traditional energy sources like coal, natural gas, and petroleum will leave entire villages without heat, light, water, and sanitary facilities.

“Lock up your daughters, folks! Planes full of baby-lovers are heading your way.”

Then she was like, “Okay, maybe the ‘sanitary facilities’ thing isn’t a problem, because we’re kinda used to going in the street. But the other stuff is true.”

There’s been no response from Thunberg, who immediately left the Glasgow conference via Pilatus PC-24 to fly over Highland cattle country and yell at the cows for farting.

“BABY LOVER” BY MEHMETULA CLARK
When Petula Clark sang “Come swing with me in my cradle of dreams,” she wasn’t referring to having a lover who was in an actual cradle.

A small detail lost on Afghans.

The loony Sunnis in the land a bunch of better nations have tried to conquer for absolutely no discernible reason because it’s literally like trying to possess a hornets’ nest—it’s painful to attempt and what the hell are you gonna do with it if you succeed?—have reverted back to their pre-9/11 ways.

Look, complain all you want about living in a country where the poor and desperate rob liquor stores, but know that if humans can be relied on for anything, it’s finding ways to sink lower the minute you think they can’t.

Yep, it can always get worse.

And count on Joe Biden, a man not above giving an underage girl the ol’ smell test, to import as many people from those nations as possible. Which is only slightly more insane than the Bush-era neocon notion that we can civilize those people in their own lands.

So lock up your daughters, folks! Planes full of baby-lovers are heading your way. Just remember that while U.S. courts are unlikely to ever prosecute these seamy dreamers for baby rape, at least in sharia court you might be able to get a dowry.

A DYNASTY DIES NASTY
Hey, did someone mention neocons?

When Cheney shot a guy in the face in 2006, it wasn’t a hunting accident but merely a literal illustration of his doctrine: “You used to have a face, now you don’t, and for absolutely no good reason.”

But now it seems that the Cheney chickens are coming home to roost…or maybe just finding a new henhouse. Last week the Wyoming GOP voted to no longer officially recognize Liz Cheney—Dick’s congresswoman daughter—as a Republican. It’s somewhat fitting considering how Cheney’s wars led to so many Americans no longer being recognizable as a human.

Say what you will about Trump’s failures as president, but at least he helped terminate the Bush dynasty (“Please clap? Oh, right—you can’t; you lost your arms in my brother’s pointless wars”). And Trump’s fan base seems to be doing the same to the Cheney dynasty, as Wyoming Liz faces a stiff primary challenge from a MAGA-backed candidate, and as she seems to find far more support on the left than the right…which can help a GOP in California, but not in one of the reddest states in the nation (no Dem has won Wyoming since LBJ, leading many to believe that Liz Cheney is Barry Goldwater’s posthumous revenge).

Slate—that leftiest of leftist websites—has declared the Cheney dynasty all of a sudden…good (after twenty years of calling it Hitlerian). Last week, Slate’s William Saletan proclaimed that the Cheney family’s “either you’re with us or you’re against us” militarist mentality, which was Nazism when used against Muslim terrorists, is actually the best thing ever when used against other Americans. Saletan lauded Liz Cheney for wanting to Abu Ghraib the living crap out of the Jan. 6 “insurrectionists,” and he applauded her father for instilling such killer instincts in her.

Rightists rejecting the Cheneys and leftists embracing them. Some bedfellows are strange…others are just downright jaw-droppingly surreal.