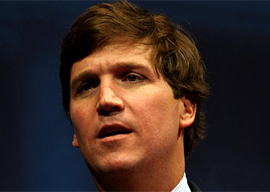 The Week’s Most Unnecessary, Involuntary, and Unsanitary Headlines

TUCKER CARLSON’S RATINGS REMAIN STRONG AFTER HE CALLED WHITE SUPREMACY A “HOAX”
Tucker Carlson is the only cable news host we can think of without wanting to immediately vomit. It doesn’t matter whether it’s Chris “Fredo” Cuomo, Rachel “Dyko” Maddow, or any of the indistinguishable Nordic female mannequins at Fox, we hate them all and would rather listen to the political opinions of a Puerto Rican shoeshine boy at Grand Central Station.

In the aftermath of the El Paso massacre and the subsequent media panic about “white supremacist terrorism,” Carlson flatly announced on his show that this whole “white supremacy” thing was a “hoax.”

Of course it’s a hoax. If this was a white-supremacist nation, nobody—especially white people—could get away with all the nasty things that are said about white people.

A few advertisers pulled out and Carlson took a brief and abrupt vacation, but as the ratings for August roll in, he remains the #2-rated personality on cable news, behind only that blockhead Sean Hannity. His ratings only dipped 1.3% over the month, and allow us to suggest that if he goes back to the bowtie in September, he’ll make up for all lost ground.

SAN FRANCISCO BOARD OF SUPERVISORS RECOMMENDS REFERRING TO CONVICTED FELONS AS “JUSTICE-INVOLVED PERSONS”
In foggy ol’ San Francisco—where the shit flows as freely through the streets as flower petals flowed through the air on Haight Street in 1967—the Board of Supervisors recently issued non-binding recommendations to change the terminology used to describe malefactors and ne’er-do-wells to something that sounds less mean and abusive. For example:

• Convicted felons and people recently released from jail should instead be referred to as “justice-involved persons,” “formerly incarcerated persons,” or, mildest of all, “returning residents.”

• Drug addicts and alcoholic derelicts will be called “persons with a history of substance abuse” instead.

We recommend that San Franciscans be referred to as “persons who are not welcome anywhere else in the rest of the country.”

FEDERAL COURT: IDAHO MUST PAY FOR TRANNY’S SEXUAL REASSIGNMENT SURGERY
Adree Elmo has a jaw and chin that could swallow Jay Leno’s jaw and chin, yet he wants us to think he’s a chick. The convicted sex offender was diagnosed with gender dysmorphia—which is still, blessed be, at least considered a mental illness—in 2012. He’s getting out of prison in 2021 but insists that if the state of Idaho doesn’t allow him to mutilate his genitals and basically leave his nether regions a mottled car crash, he will be suffering punishment that is cruel and unusual compared to whatever eternal mind-fuck he put his sexual assault victim through. And, what’s even worse, a federal appeals court agrees with him—they say the taxpayers of Idaho have to foot the bill for the genital-mutilation surgery. According to Edmo’s lawyer:

What “she” very much needs is to stop referring to himself as a woman.

“If this was a white-supremacist nation, nobody—especially white people—could get away with all the nasty things that are said about white people.”

In other tranny news, some transgender vandals nailed a rat to the door of a rape crisis center in Vancouver, WA, claiming that the shelter’s women-only policy discriminated against them. In the tranny community, feminist females who don’t crumble to nonreality and say that human beings with penises are women are known as “TERFS,” AKA “Trans-Exclusionary Radical Feminists,” and there’s been a years-long cultural civil war between old-school feminists who believe women’s spaces should be for women and new-school tranny militants who insist that women should accept men who claim they’re women or risk having rats nailed to their doors.

MICHIGAN CANDIDATE DROPS OUT OF RACE AFTER VOWING TO KEEP CITY AS WHITE AS POSSIBLE
Jean Cramer is a 67-year-old woman in Marysville, MI who looks as if Dr. Ruth Westheimer, Phil Spector, and Estelle Getty all had a baby. Marysville has nearly 10,000 residents, over 90% of whom are white. Marysville is perched a mere fifty miles north of Detroit, whose 700,000+ residents are nearly 90% of Negroidal origin.

While running for City Council, Cramer announced that she wanted to keep Marysville white:

Keep Marysville a white community as much as possible. White. Seriously. In other words, no foreign-born, no foreign people. Husband and wife need to be the same race. Same thing with kids. That’s how it’s been from the beginning of, how can I say, when God created the heaven and the Earth. As far as I know, as long as we’ve been here, Marysville has been a white community, a white city.

While she refused to disavow her comments, Cramer dropped out of the race shortly after making them. She should have realized that for any woman to have a political career in Michigan, she should be black and run on a promise of keeping Detroit black.

BLACK WRITER SHARES ANGUISH OVER “EATING WATERMELON IN FRONT OF WHITE PEOPLE”
Cynthia Greenlee is a black female writer for Vox who doesn’t post a lot of pictures of herself online, which forces us to suspect that she’s overweight. She recently penned a potent, lacerating, culturally incisive, and soul-chilling essay titled “On eating watermelon in front of white people: ‘I’m not as free as I thought.’” Recalling a recent traumatic experience at some business seminar where they apparently allow overweight black women to attend, Greenlee tells of how a white person did absolutely nothing besides walk up to her near the fruit tray, yet it triggered a tidal wave of racial trauma to roll over the presumably adipose body of this innocent black women whose only crime was to desire a slice of watermelon:

My hand hovered over the fruit tray, about to spear a chunk of watermelon, when a white person walked up. I paused…. I moved my fork carefully away from the watermelon, grazing over the pineapple, and picked strawberries instead….Safer territory, I thought. Safer fruit….I didn’t want to be an updated version of that Sambo figure, tap-dancing and braying in joy at a succulent watermelon wedge.

I couldn’t remember when this watermelon-shame seeped into my eating.

Greenlee goes on to speculate that perhaps it was during the Obama era—when the nation was supposedly deluged with hateful images of watermelons and bananas and monkeys—which is, oddly, not like we recall it at all, because it seemed like one eternal creepily religious worship session of Barack Obama—that induced her watermelon-related self-loathing. At the end of the essay, she boldly announces that she will eat watermelon in public—that’s right, in front of white people—and she will refuse to feel shame for it, not that any white people were even thinking about shaming her for it in the first place.

NEW JERSEY NAACP PRESIDENT BLAMES JEWS, THEN BLAMES “JEWISH MEDIA” FOR NOTICING
Jeffrey Dye is the president of the Passaic, NJ chapter of the NAACP. He has a shiny forehead and a big flat nose, almost like a garden shovel. According to an article in the New Jersey Globe, he was very curt to a reporter when contacted by phone: “I don’t talk to fucking Jews. Get the fuck out of here.”

Outraged by what he’s saying is a gross misrepresentation of his beliefs, Dye took to Facebook and churned out what we must say is the most breathtakingly anti-Semitic tirade of the year thus far. Because reading the entire thing is the closest you will ever come to knowing what it feels like to sit around smoking crack and blaming Jews—without actually, you know, sitting around smoking crack while blaming Jews—we felt compelled to present his entire Facebook post with neither a jot nor tittle changed, all the way down to The Whole Initial Caps Thing:

Ok To Everyone Looking At This Racist Bullshit I Want You To Be Clear, The Statement ( “I Don’t Talk To Fucking Jews” ) Is Simply A Lie By David Wallstien [sic—it’s Wildstein] Who Is A Jewish Reporter For The New Jersey Globe. Now Tell David Wallstien [sic] To Let You Hear The Tape Which I Know Damn Well They Was Recording & I Promise You In Fact I Will Give That Person Who Has That On Tape $5,000.00 Dollars. What You Are Seriously Watching Here Is ( “COINTELPRO & JEWISH MEDIA PROPAGANDA ASSASSINATION HIT TEAM” ) At Work & It’s That Racist Gary Schaer Behind It All & He Is Using The Jewish Media To Get Me Fired From A Job “Which He Did For Me Telling The Truth About Israel & The Killing & Murder Of The Palestinian People & The Enslavement Of African People” I Want You All To Know This Isn’t Really About Jeffrey Dye This Is About Them Working Together To Use Me Against Our Governor Phil Murphy Who They Are Really After & Their Using Me & Others Like Me To Tarnish Our Governor Phil Murphy So He’s Not Successful In His Re-Election & ( “Gary Schaer & Hector Lora Who Are Both Former Republicans Are Using Both Parties To Get Rid Of Governor Phil Murphy. Why Do You Think They Was So Close To Former Governor Chris Christie” ) And They Want To Disrupt & Dismantle & Get Rid Of The Passaic NAACP And Me The President. When You Have Any Real Activist That Speaks Like I Do He’s A Threat & Dangerous To Any Racist That’s Trying To Destroy Black & Latino People To Advance Their Cause To Dictate & Control This World.

We would like to see more of this, both from Jeffrey Dye and from the Jews who are noticing him.

KKK HOSTS SECOND INDIANA “KOOKOUT”
Hey, if you and the rest of your family are members of the Knights of the Invisible Empire and were just itchin’ to share some fellowship, good eats, and Indiana sunshine with the rest of the Klan, we hate to disappoint you, but you done missed out on the KKK’s second annual “Kookout” in Madison, IN, which was held yesterday from 1-3PM in Jaycee Park. According to a flyer advertising the shindig:

Powerful message, if a bit cheapened by the excessive use of exclamation points.

A spokesperson for the Klan said that the City of Madison had made it difficult for them to reserve the park “due to our beliefs” and accused the city fathers of unlawfully denying a reservation “simply to allow us to have a family Kookout.”

What’s this country coming to when the KKK can’t have a simple, good-old fashioned family barbecue in an Indiana park on a late-summer afternoon? It almost tempts a person to think that the Klan doesn’t have any power, but that’s crazy talk.