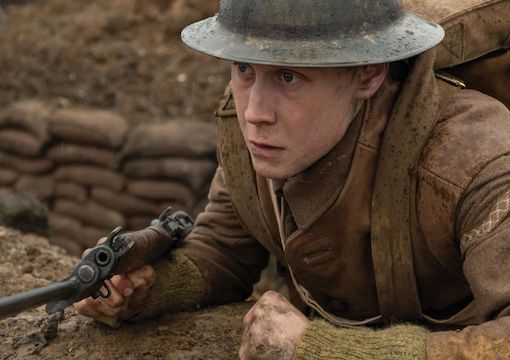 2019 turned out to be a good year for quality guy movies after all, as several veteran directors ignored the anti-male zeitgeist and just shot the films they’ve long wanted to make, such as Joker, Once Upon a Time…in Hollywood, The Irishman, and Ford v Ferrari. Sam Mendes, for example, delivers in 1917 an admirable if gimmicky videogame-style World War I movie inspired by his beloved grandfather’s stories of two years of fighting as a lance corporal in Flanders Fields.

Mendes notoriously won the Best Director and Best Picture Academy Awards for his 1999 film debut, American Beauty, an Oscar-bait concoction that remains intensely hated by fans of more memorable films from that fecund year such as The Matrix, Fight Club, Toy Story 2, Being John Malkovich, Election, and Office Space.

But Mendes, who mostly focuses his efforts on the London stage, has somewhat redeemed himself since then with Jarhead, Revolutionary Road, and one of the better James Bond movies, Skyfall.

In 1917, Mendes abstains from political proclamations, leading the film critic in Salon to denounce his movie as “irresponsibly nationalistic…. The film has amazing acting and technical achievements, but its simplistic storytelling falls in line with Trumpism.” Actually, Mendes seems mostly motivated by pride in his grandfather’s bravery in answer to the call of duty.

On April 6, 1917 (symbolically, the day Congress declared war on the German Empire, ultimately saving the Allies), two British corporals, Blake and Scofield, are ordered to report to the general (played by Colin Firth). He informs them that the Germans have pulled back nine miles, and that the colonel (Benedict Cumberbatch) in hot pursuit with 1,600 men plans to attack the retreating Germans at dawn. But aerial recognizance reveals that rather than the long-awaited collapse of the Hun front, it’s a pre-positioned trap. The wily Boches will massacre the two battalions, including Corporal Blake’s older brother, unless the two young men can deliver the orders canceling the attack.

The script explains that the telephones aren’t working, although no explanation is given why a Sopwith Camel couldn’t fly up to the front and drop a dispatch to the colonel.

But all in all, wartime couriers make good characters for an adventure story. And calling off an advance is an appealing premise for a movie entitled 1917, because going over the top into machine-gun fire on the Western Front almost never succeeded. It’s April 6, 1917, and the Yanks are coming over there, so the smart thing is for the British to hunker down on the defensive and not get themselves all killed playing the hero.

But two soldiers have to be heroes to save the rest.

“Much of the movie resembles an unfunny Buster Keaton movie in which Buster is constantly running past catastrophes.”

On the other hand, there isn’t much specific interest these days in Great War movies, unlike with 1998’s Saving Private Ryan when many WWII vets were still alive. (My best friend took his father, who’d never spoken to his sons about his experiences landing on D-Day, to see Spielberg’s film. On the way out, the old man broke his half century of silence on the subject: “Yup, that’s what it was like.”) Mendes’ grandfather, for instance, died in his 90s in 1991; the number of moviegoers who can remember talking to a veteran of WWI is shrinking steadily.

With demand for Western Front movies at a low ebb, it’s understandable that Mendes went with an unusual ploy to attract attention: making the entire 119-minute movie look like one continuous take. In reality, 1917 is made up of a few dozen shots ranging from 39 seconds to at least six minutes that are stitched together with digital trickery, but it indeed looks like one long shot.

This stratagem makes for a stirring “Making of 1917” documentary featurette. As a theater director (recently knighted for his contributions to the British stage), Sir Sam is familiar with the challenge of not being able to take a break every few seconds the way movie directors do. But to carry out the kind of nonstop storytelling that happens nightly on stage in a big-budget war movie required prodigious problem-solving by top filmmaking talent such as cinematographer Roger Deakins.

The planning challenges behind making this movie are fascinating.

For example, say the two protagonists are walking through an abandoned German trench debating whether to turn left or right at the next crossing. To avoid one of those awkward delays of which real life is filled, they must physically arrive at the turning point exactly upon the decisive line. Rather than shorten or lengthen the dialogue to fit the distance to be traversed on the set, Mendes ordered the crew to dig trenches of exactly the right length for each segment of dialogue.

You can see why Mendes thought a movie set on the Western Front would be ideal for a one-take movie: Trenches can be excavated to any length he needed. The crew ultimately built over a mile of elaborate trenches.

The Corporal Scofield character is portrayed by George MacKay, who looks like Buster Keaton in Dough Boys, with the kind of pale, immobile face that movies liked a century ago. In fact, much of the movie resembles an unfunny Buster Keaton movie in which Buster is constantly running past catastrophes.

Back in Keaton’s 1920s heyday, the silent-movie business was making rapid progress at learning how to move the camera around. But then along came sound and color to make the equipment much bulkier. Today’s miniaturization of digital cameras has tempted contemporary directors to try stunt films like 1917 and the 2014 Best Picture winner, Birdman, another quasi-single-shot movie.

Yet, the more that the novelties in 1917 inspire you to ponder the organizational requisites undergirding each moment of the film, the more you are distracted from the drama.

Not surprisingly, the end result of all this meticulous labor reminds you of why the vast majority of movies are made with cuts. Sure, we go through life as if in a single-take film, but personally, my life isn’t as exciting as the movies, in part because filmmakers leave the one-damn-thing-after-another boring bits of living on the cutting-room floor. To paraphrase the Eagles’ song “James Dean,” “And I know my life would look all right if I could see it edited by Thelma Schoonmaker.”

An additional problem with making a film as one long tracking shot is that, as Deakins admits, they “can’t really light it” because both actors and camera are in constant movement. But lighting is what contributes much of the glamour to movie close-ups. Granted, trench warfare was exceptionally unglamorous, but still…

Also, there aren’t many close-ups in 1917 due to the exigencies of the concept. Most characters wind up being filmed at medium range. Due to the lack of close-ups I’d suggest moviegoers sit up near the screen. I took my usual seat in the back of the theater, but the picture would have had more emotional impact on me if I’d been front and center.

And since most of the movie consists of walking through trenches, the camera switches back and forth to view them coming and going. When the camera is behind the actors, it makes it hard to tell which one is speaking.

With everything else going on, I didn’t pay adequate attention to the script, but I felt like there should have been at least a second plot twist. As it is, the latter half of the movie plays out largely as expected.

In fact, the script, which received a curious Best Original Screenplay nomination, resembles a role-playing videogame in which you progress by collecting items and learning secrets. For example, when searching the abandoned farmhouse, should you take the bucket of fresh milk? Yes! You will later need it to trade to the French maiden for her secret knowledge of which way the river flows.

But because 1917 is a movie, not a game, you don’t actually get to make these decisions. Indeed, like most game-influenced films, 1917 is too fast-paced to let the audience think along with the characters. Just about the only motion picture that has succeeded in reproducing some of the pleasures of a first-person-shooter game, the Coen brothers’ No Country for Old Men, did it by slowing the pace down to give the audience time to try to make up their minds what the hero should do.

It would probably be to the long-term benefit of 1917’s reputation if on Feb. 9 it were not to sweep the Oscars the way American Beauty did, so future viewers can stumble upon it without excessive expectations.