Overton Window to the Soul 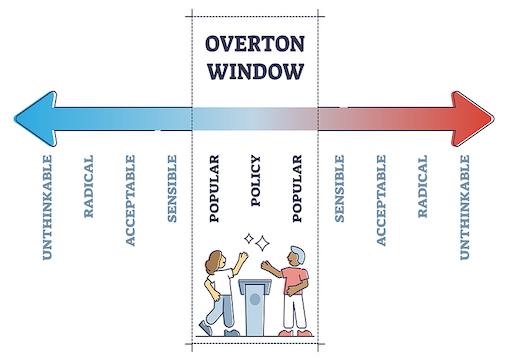 One of the frustrations of writing a weekly column is that sometimes you wrap a piece, post it, and that very day the Special Olympians of public discourse provide fodder you wish you’d been able to include.

I’d just finished writing about the lunacy of rightists who see in Kanye West a leader, a prophet, a man with a plan (when in fact he’s just severely mentally ill), when billionaire doodler Scott Adams released a video about how Kanye’s the true god-king, a master strategist playing “4D chess” to “break the system” because “he never loses.”

“Taking any topic and coupling it with insanity will always alienate the mainstream population from that topic.”

What is it with these idiots that they always have to be following a Great Leader they imbue with superhuman powers of perception and ability?

“In my opinion, Kanye broke Elon Musk,” Adams solemnly intones. While over on Tucker, there was James Woods saying, “Elon Musk saved America.” Not Twitter, not social media, but America!

Then there was Alex Jones’ in-house Afro-Arab Ali Alexander, claiming that he and Jones are the real “leaders” who “broke the chessboard” (regular or 4D?) by “breaking the Overton Window.”

What’s unintentionally funny about this is how none of it matters; the massive gulf between the import these things have in the minds of rightist media personalities and the impact any of it actually has in the lives of everyday people. I’ve written time and again about the dangerous tendency of rightists to drift off into big fancy dreams of conspiracies, plots, plans, wizards, Moloch, magic, and mystery, and I predicted back in 2020 that this escapism would intensify after Trump’s loss, because the more these people lose real-world fights (like elections), the more they retreat into their minds, where they can win grand imaginary battles.

Scratch a MAGA and you’ll find Bastian from The Neverending Story. He can’t fight the bullies in the real world, but he sure can whip ’em good while flying his imaginary dog-dragon.

What makes this so tragic is, Republicans are the ones best situated to make real-world gains by tackling real-world issues, and I hold firm that the prime lesson of the midterms was that as MAGAs descended into QAnon election conspiracy J6 “god-king Trump” Lindell/MTG/Boebert craziness, voters stopped seeing them as the better choice to deal with meat-and-potatoes issues, even though those same voters saw Democrats as lacking as well. Democrats prevailed not because independents particularly liked them, but because they at least weren’t speaking their own Kallikak language.

Kanye came at just the right time for rightist fantasists, whose unhealed wounds from 2020 had been gashed anew by the midterms. So if the tendency of bruised rightists to embrace escapism was already strong, Kanye arrived when it was strongest ever.

The Kanye thing is entertaining, to be sure. And it can be enjoyed ironically as a freak show. After all, we live in an age where the “cash me ow-sye” girl, a retarded delinquent, can go on OnlyFans and rake in $50 million from a legion of irony bros who give her money so they can LOL.

So between the people enjoying Kanye for the ironic LULZ and the ones who are imbuing his ravings with an import they don’t have, these kinds of things can very easily assume a false importance where they “matter,” but not to the people whose votes decide midterms.

To be clear, LULZers and fantasists are not exclusively found on the right. But they’re found on the right in such numbers that sane rightists have an obligation to be on guard. That’s why I write about these things. Not to contribute to the very freak show I condemn, but because although the Kanye thing will fade, the rightist reaction to it represents an ongoing pathology that’ll rear its head again and again. The names and specifics will change, but not the disorder.

What I found especially interesting about Ali Crackbar’s InfoWars boast is the idea that somehow the Kanye spectacle affected the Overton Window. The Overton Window, defined as public policy and social issues that are deemed acceptable by the mainstream population, consists of a spectrum, where policies and issues that are considered “radical” and “unthinkable” fall outside the window, while those considered “sensible” and “popular” fall within it.

It was very common after Trump won to hear rightists declare, “We’ve shifted the Overton Window!”

Well, yeah, but only if Trump had been an actual Nazi. An actual National Socialist becoming U.S. president would’ve been an Overton shift indeed. But Trump wasn’t a Nazi; Trump has no ideology. Trump isn’t anything but pro-Trump (“I mean, say what you want about the tenets of National Socialism, dude, at least it’s an ethos”). Trump’s 2016 platform was just a return to border restrictions that used to be advocated openly by both parties.

It was Democrats who tried to constrict that window and shift “tight border controls, deportation of illegals” from “sensible and popular” to “radical and unthinkable.”

Trump, or more accurately people like Ann Coulter who gave him his platform, made a smart bet that the Democrats had failed; that the window had not constricted among voters. That what Dems now try to present as radical is still seen as sensible by enough working-class whites and right-leaning independents to elect a president.

A smart bet that paid off…until Trump actually started to assist Democrats in constricting the window on crime. As Dems tried to take “tough on crime” from “sensible and popular” to “radical and unthinkable,” Trump, his mindless, laughably impotent “law and order” tweets aside, joined in (along with other “right-wingers” like Newt Gingrich and Kevin Stitt) to normalize the idea that it’s every politician’s noblest goal to free black criminals and “reform” the system that dared punish them for breaking the law.

In the Overton Window definition, it’s the “considered acceptable by the mainstream population” line that’s key. And the battle the past few decades has had nothing to do with rightists expanding the window, but rather leftists trying to close it on certain things (the border, crime) while concurrently working to expand it on gender and race (by making transgender ideology and antiwhite racism “acceptable to the mainstream population”).

By and large, the GOP’s been content to sit back and let Dems dictate Window terms. And when Trump tried to reassert the 1990s border Window, when he ran on an unapologetic anti-immigration platform, he won. But then he went wacky, forgetting that platform entirely to the point that now he’s so neck-deep in far-out conspiracy bullshit, no one even associates him with the border anymore.

Ron DeSantis has worked Overton wonders in Florida. Under DeSantis, “tough on crime, unapologetic on law and order” is “sensible and popular,” while “telling children they should surgically change their sex” is “radical and unthinkable.”

DeSantis’ Florida represents a successful restoration of the commonsense 1990s Overton Window as it existed before Dems corrupted it.

The InfoWars loons claim they’re “breaking” the Overton Window, but “I like Hitler” was never considered acceptable by the mainstream U.S. population in the past, and it isn’t now. Neither is “the Holocaust didn’t happen.” These nuts believe that by being outrageous, they can push certain topics into the mainstream. But that’s the opposite of true; taking any topic and coupling it with insanity will always alienate the mainstream population from that topic.

After Kanye said “I love Hitler” and “the Holocaust didn’t happen,” do you think those positions are now “considered acceptable by the mainstream population”?

The Kanye/Milo/Fuentes/Jones carnival appealed to vocal but insignificant fringe lunatics. Whereas Trump 2016 used 1990s Overton Window standards to appeal to a significant demographic, Ye/Milo/Fuentes/Jones are using a Window that never existed (i.e., things that were never and are not now considered acceptable by the mainstream population) to appeal to an electorally insignificant group of imbeciles who are LOUD on Twitter so if you’re an imbecile too and you want to abandon the real-world battles you’ve lost for the fantasy ones you can win in your mind from the comfort of your couch, it’s tempting to throw in with those LOUD warriors.

It would be easy to mistake denier volume for denier significance, to say “Kanye shifted the Window and now denial’s acceptable!” But that isn’t true. Ye’s rants combined with Elon’s amnesty simply made deniers louder, not more numerous.

And who does that help? The ADL, which always seeks to exaggerate the numbers and impact of deniers whenever possible.

Foes on paper, but brothers in the same illusory battle.

I return to the point I made last week: Look how far MAGAs have drifted from the meat-and-potatoes, simply stated appeal of Trump’s 2016 victory (the right’s last significant national one): wall, deportations.

Concrete (literally). Not abstract. Not trying to open the Overton Window for nuttiness, but “conserving” (in the best sense of the term) the 1990s Window that leftists want so desperately to constrict.

Everyone who’s trying to lead you away from that concrete reality is a villain, be it the ADL or Alex Jones. It’s up to you to ignore them.

Enjoy the freak show (I’m no hypocrite; I certainly do), but don’t confuse it for anything that matters.

Mercifully, the Kanye Karnival will soon be a distant memory. But the right’s susceptibility to such nonsense will remain, and might even increase as recent electoral defeats prompt rightists to mentally flee the real world much like the Native Americans who, facing extinction, embraced the Ghost Dance because becoming lost in fantasy was the only way to keep up not just morale, but hope itself.

Please, leave the dragon-dog in Fantasia, and leave the Ghost Dance with all the dead Injuns who thought delusional busywork could stop real-world bullets.