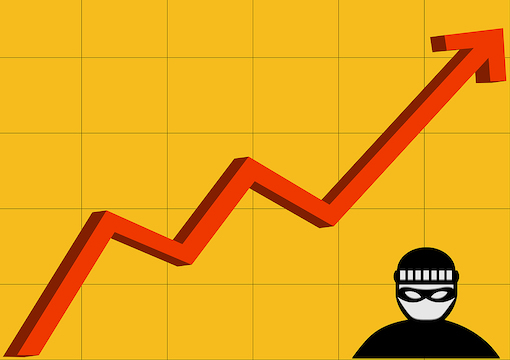 Why is it so hard to predict the future?

For example, why didn’t the Biden Administration guess that few soldiers of the now-defunct Afghan National Army would feel like risking becoming the last Afghan to die for the American-backed government, so once the U.S. closed Bagram air base there’d be an unseemly rush for the exits?

For that matter, why didn’t the vaunted intelligence community foresee that Saddam Hussein wouldn’t have weapons of mass destruction?

“What’s a little boom in murder when littering and loitering arrests were down, down, down?”

Similarly, with all the scientific expertise at the disposal of the White House, why did Biden more or less announce victory over the virus on July 4, almost the exact day of the upward inflection point of the Delta wave? And why did Biden then proclaim vaccine mandates just as the Delta wave appeared to be burning out in states where it had first taken off, such as Missouri?

As I type this, I notice that I might have spoken too soon, as case counts rose on Monday.

After all, it’s hard to predict the future.

There are two common explanations for these failures of anticipation. The first is that while it may look like the deep state is botching badly, they actually have accurately prognosticated every contingency and even their apparent fumbles are all part of their nefarious triple-bank-shot master plan.

Alternatively, the powers that be really are nitwits and many outsiders could do better in their place.

A less popular middling view is that making accurate guesses about topics of broad, pressing interest is simply innately difficult.

Granted, there are many things that are easy to predict correctly: For instance, I predict that next year St. Louis will have a higher murder rate than San Diego.

But people don’t find my kind of forecasts terribly interesting. Instead, what audiences will pay money for are confident individuals explaining why their side will win a contest that objectively appears to be a toss-up. For example, Fox football analyst Colin Cowherd says to pick the Baltimore Ravens to lose by less than three points to the Kansas City Chiefs, arguing that the Ravens know, “The way to beat a great quarterback like Mahomes is to have him become a spectator.”

It’s just more fun to think about exciting competitions rather than enduring verities.

For example, about a dozen years ago the media excitedly discovered the triennial PISA test of 15-year-old students across dozens of countries. It actually is pretty fascinating stuff.

Except…it’s not like the World Cup where the next champion is almost always a different country than the last winner. Instead, Singapore always comes in near the top of PISA scores and various third-world countries near the bottom, with the U.S. in the middle (but, realistically, we do pretty well considering our racial demographics).

So, the press lost interest in PISA and moved on to more competitive (or more contrived) fights where luck plays a large enough role to keep things perpetually interesting.

Not surprisingly, therefore, few designated experts average much over 51 percent right on their predictions on the topics many people find interesting. If somebody was very often right about the stock market or the NFL point spread, others would reverse engineer how he did it. And then he’d stop being able to do it so much because, for example, the Las Vegas bookies would take his insights into account when establishing the betting line.

Conversely, this also means that in fairly efficient markets, you can go on TV and make predictions about competitions of broad popular interest without having much of a clue about what is really going to happen and routinely come close to being 49 percent right just through dumb luck.

After all, who’d you rather watch on TV: the introverted nerd who is right 52 percent of the time or the dope with the big personality who is right on 48 percent of his calls, but who tells you why your team is going to win?

The societal downside of efficient markets is that there isn’t much accountability for experts who aren’t actually very expert. Because audiences can’t stay interested for long in predictions about boring questions like school test scores or crime rates, far more attention is paid to more interesting but trivial questions like which team will come out best from the NBA draft.

The problem with the ever-growing amount of fascinating but ephemeral who-is-going-to-win coverage in the press is that fewer and fewer people know much about important but tiresome realities.

For example, Charles Murray had to come out of retirement this year to write a short book pointing out two things we need to know before we completely blow up the country in our frenzy to search out and destroy Systemic Racism and White Supremacy: Actually, blacks do tend to be less lawful and less intelligent.

You might think that everybody knows that, but my impression is that many pundits are shocked to hear these extremely well-documented facts. They assume that they can’t possibly be true or they’d have already known them, and thus all the scientific evidence has to be the product of a nefarious conspiracy.

Because guessing the future is challenging, I seldom attempt it. What I try to do instead is to notice the present.

For example, having spotted how the first Black Lives Matter era of 2014–2016 unleashed rioting, murder, and terrorism in cities where it triumphed over the police, within days of the death of George Floyd I was hollering that the second Black Lives Matter era was turning into an even bigger disaster for America’s cities than the last one.

And so it was.

This week NBC News is promoting a Democratic spin on the past fifteen months:

…But today, as Republicans revive familiar warnings about out-of-control crime in pursuit of regaining power, the prominent moderate Democratic group Third Way has a different message for the party: Don’t take the bait; it’s a lie.

A new report by Third Way digs into the numbers and concludes: “Contrary to the media narrative, overall crime decreased in 2020 compared to 2019.”

So I replicated Third Way’s analysis of 22 states plus the District of Columbia and found that murder was up 31 percent in 2020 over 2019, by far the worst annual increase in the Big Sleep in the six decades for which there have been reliable national records.

Or as NBC puts it:

The study shows that homicides went up last year, but it found the category to be an outlier.

After all, what’s a little boom in murder when littering and loitering arrests were down, down, down?

What about 2021? Jeff Asher is tracking 85 cities that post their crime stats online. Year to date, murders are up 10 percent over last year.

Of course, half of 2020 YTD came before the Racial Reckoning began on May 25 and shot the murder rate through the roof. So, it’s likely that the 2021 murder rate is no higher than it was during the Summer of George.

In other words, murder has plateaued at a new normal, about 40 percent higher than when Black Lives Matter was hatched at Ferguson in 2014.

And even that amount of mayhem will soon become so boring that the press won’t even feel obligated anymore to dream up new talking points to try to obfuscate it.