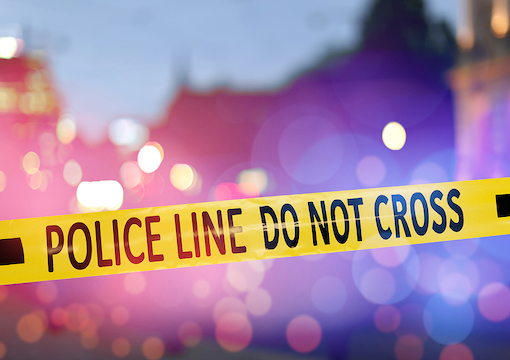 Everybody is talking about murders, such as the Atlanta massage parlor massacres, the Muslim terrorist in Boulder, and the Washington, D.C., adolescent girl carjackers.

But tiny sample sizes of spectacular crimes allow polemicists to hype whichever claims they want. What we need are large amounts of data.

For example, everyone finally now admits what I’ve been saying for months: that murders went up a record-breaking percentage in 2020. But most still don’t want to admit it had anything to do with Black Lives Matter. One way to begin analyzing what caused the homicide boom of 2020 is to measure when it ignited. So, later in this column I’ve graphed every firearm murder day by day for 2019 and 2020.

Of course, if you only think about one crime at a time, you can spin each one however you please. For instance, the national press decided that the Atlanta murders were all about White Supremacy and Anti-Asian Hate, which was convenient for reinforcing The Narrative during 2021 when numerous videos have circulated of blacks assaulting Asians on the street.

So, the media agreed to blame the spa shootings on Trump referring to the “Chinese virus” eleven months ago. Granted, back during the George W. Bush era, the press would have instead used the killer’s confession about his religious-sexual motivations as proving the horrors of evangelical Christianity. But fundamentalists are now seen as a defeated, almost powerless enemy, and so the ideological mopping-up operation has moved on from Christians in particular to whites in general.

In contrast, the official story line about the Boulder shooter is Gun Control.

The Biden Administration is gearing up to crack down on rifles, seeing them as the white man’s weapon. In reality, according to the FBI’s statistics, rifles accounted for only 5 percent of all 2019 homicides in which a particular type of gun was identified, with shotguns adding 3 percent. Handguns, in contrast, were used in 92 percent of known gun homicides.

Of course, handguns are the main weapon with which blacks slaughter blacks in such vast numbers. White Democrats like Joe Biden aren’t terribly interested in reducing the number of blacks murdered by other blacks, especially if they’d have to admit that murder is largely a black problem in the U.S. You aren’t supposed to know this, but in 2019, 55.9 percent of known murder offenders were black. And blacks traditionally are responsible for a slightly larger share of gun murders than of total murders due to their cultural predilection toward shooting into crowds of partyers in the general direction of that guy who dissed them.

“Everything I’ve seen suggests there was an explosion of black-on-black murders in the wake of the ‘mostly peaceful protests.’”

The Boulder massacre produced the mirror image of journalism’s Trayvon Martin fiasco back in 2012. As you’ll recall, before seeing the shooter’s picture, the media instantly assumed that anybody named George Zimmerman must be a white supremacist Aryan Nazi. They only discovered later that the tri-racial Peruvian-American looks more like the son Barack Obama never had.

In contrast to Zimmerman, the press had photos of the Boulder killer but not his name. Hence, they salivated over their automatic assumption that he was a white male Trump voter, only to be humiliated when the killer turned out to have the most Arab terrorist-sounding name ever: Ahmad Al Aliwi Alissa.

Soon, America was back to normal with the usual mass shootings at black social events, such as the Virginia Beach shoot-outs that killed two and wounded eight and the Fishtown Golf & Social gunplay that wounded seven. As Sailer’s Law of Mass Shootings predicts:

If there are more killed than wounded, then the shooter is likely not black.

If there are more wounded than killed, then the shooter is likely black.

And then came the amazing carjacking murder of an elderly Pakistani immigrant by 13- and 15-year-old black girls in Washington, D.C., in front of uniformed National Guardsmen standing around to prevent white nationalist domestic terrorism. Did the girls even know how to drive?

There was no politically correct way to spin this one, so The Washington Post has already dropped this local story from its headlines, in contrast to the newspaper’s 198 articles mentioning the words “Atlanta Asian shooting” in the two weeks since the Atlanta murders.

Clearly, a disproportionate fraction of the incidents of anti-Asian violence in 2021 are perpetrated by African-Americans. But then that’s the way it is every year. As I reported in October, the last time the federal government’s National Crime Victimization Survey reported on black vs. Asian violence was 2018:

According to inadequate sample sizes, blacks aggressed against Asians 50,000 times vs. a little over 500 times that Asians attacked blacks, for an 89 to 1 racial ratio of total incidents. Because there are almost twice as many blacks as Asians, on a per capita footing that would be 46 to 1.

Assuming violence against Asians is actually up in the first quarter of 2021 over 2020 (although nobody knows that for sure yet), that raises two follow-up questions:

—Are blacks choosing to make Asians a higher percentage of their victims this year?

—Or have blacks simply been committing more crimes overall during the George Floyd Era, and Asians are just taking their proportionate lumps along with everybody else?

As for why murders shot up last year, we’re now a little closer to the answer. I’ve been hollering since last summer that the Racial Reckoning is unleashing a murder binge, so I’ve now got the complete day-by-day numbers. A reader scraped up for me the last two years of murders from the Gun Violence Archive, a reasonably reliable listing of all the firearm killings in the country since 2013. (Guns aren’t the only way to murder somebody, but they account for a large majority of the killings.) I graphed murders per day, using a seven-day running average, with 2019 in blue and 2020 in red: 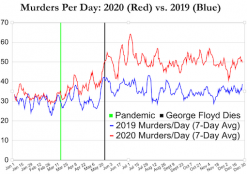 As you can see, compared with 2019, 2020 was a bloody year, going all the way back to January and worsening during the first couple of months of the pandemic. Yet, the most extraordinary fact of 2020 is that for the seven-plus months from George Floyd’s death to the end of the year, the United States averaged 50.5 murders per day, up 41% from the 35.7 per day during the same long period in 2019. The consistency of the gap between 2020 and 2019 during the Racial Reckoning is striking.

You are probably as sick as I am of hearing journalists proclaim this or that to be the New Normal. Let’s hope that fifty murders per day during the warmer months is not Anti-Racist America’s new normal.

We don’t yet have an official count of the racial makeup of the incremental murderers, but everything I’ve seen suggests there was an explosion of black-on-black murders in the wake of the “mostly peaceful protests.”

During the French Revolution, Edmund Burke observed: “The Revolution was made, not to make France free, but to make her formidable.”

Similarly, Black Lives Matter has succeeded not in making blacks safe, but in making them exuberant.