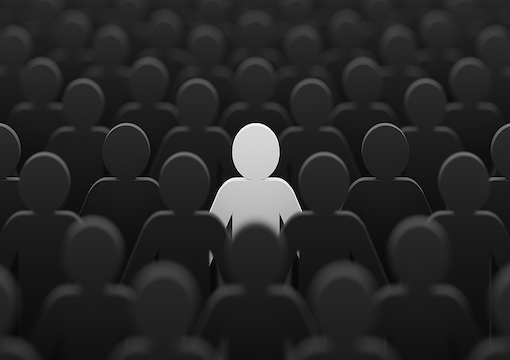 In 2019 I penned a column titled “Can the Right Fight Without Saying White?” The gist was, you can’t fight antiwhite racism without calling it what it is. Several weeks ago Tucker Carlson, who used to tap-dance around the topic of antiwhite hatred, preferring to more obliquely condemn bias against people “based on the way they look,” made up for lost time with a monologue in which he said “white” a whole bunch of times. “We haven’t said that often enough or clearly enough,” spoke Tuck, as if to offer an apology of sorts. “What we’re seeing is antiwhite racism.”

I’d been meaning to update my “Without Saying White” piece, because things have accelerated to such an extent since 2019 (the George Floyd “reckoning,” BLM going from fringe to halls-of-power, Soros triumphant nationwide, CRT triumphant in schools, the workplace, and the military), my thinking’s shifted a bit. Maybe it’s because I’ve seen other rightist pundits ape my “you gotta say white!” talking point as if it’s more meaningful than it is. As if it’s some kind of panacea. Which it isn’t.

If fact, I think it’s wrong to put too much focus on words. You don’t stop an apartheid by yelling at it. Yeah, it’s important to put a name on a thing. But this isn’t David Lynch’s Dune; you’re not gonna shatter obelisks with a killing word. It feels great—liberating, even—to match the left’s racially inflammatory rhetoric. But does it actually change anything?

And here, we need to acknowledge the 1,488-pound gorilla in the room: Folks on social media, left and right, love talking about race. Race sells. I made this point in my recent reply to John Derbyshire. Race gets hits, race gets views. You think all those Salon, Slate, Vox, WaPo, and NYT pieces about how this is racist and that is racist and whites are bad because of this and whites are bad because of that occur in a vacuum? Not at all. Race op-eds get shares, from those who agree and—even more so—from those who don’t.

Answer truthfully: How many times have you shared some leftist piece of race-hateful junk on Twitter or Facebook, adding, of course, your own devastatingly clever caption, because dammit someone’s gotta put those lefty loons in their place?! And who better than you?

Laugh as you will at “legacy media,” but The New York Times has more eyes on it now than ever before. Even at its height of print subscriptions during its heyday, it didn’t have as many readers as it does now digitally. And when the Times runs a piece about how guitars are racist or diapers are racist or the fucking air we breathe is racist, your shares help set its ad rates.

They’re trolling you. They welcome your outrage.

I’m reminded of something Christina Sommers did last year. Vox ran a disgusting hit piece about how Dolly Parton—one of the most beloved figures in music—is evil because she’s white. Not because of anything she’s done—the author admits, Parton’s sinless—but because her skin is white. Sommers wanted to share the vile post with her followers, so you know what she did? She went to archive.is and got a screenshot so the site wouldn’t benefit from her shares. Took all of fifteen seconds.

“It’s probably best to wean ourselves off the rhetorical crusades and focus on fighting the oncoming ‘corrective apartheid’ the only way that might work: in the courts.”

You ever done that? Probably not. Most of us don’t because deep down we want Vox and CNN and Daily Beast to see our shares because we have this fantasy that someone there is gonna read our amazing rejoinder and be like, “Oh shit! @SwampDrainerStopTheSteal totally destroyed us! We’re finished!”

We all play that game, and the game is a distraction…an illusion of victory (“Oooh, I owned that guy”) with no real-world impact. The people (especially the “billionaire philanthropists” mentioned in a previous column) who are turning this nation into a Third World cesspool love to watch their media puppets mix it up with Twitter warriors, everyone having a ball dunking and burning and clapping back with receipts while the actual business of destroying the country occurs well away from social media.

Take a guess how George Soros felt when his real-world machinations were countered by Trump tweeting all-caps “LAW & ORDER!” Think he felt threatened?

Remember last month when Matt Walsh and the Daily Wire crew took Twitter by storm with that fundraising stunt to help AOC’s long-suffering abuela? Oh what fun that was! Matty and Benny OWNED the libs, and then the libs DUNKED on them, and then other rightists DESTROYED the Wire crew for wasting fundraising resources on AOC, and then Matty and Benny CLAPPED BACK at the rightists for having no sense of whimsy, and hot damn if everyone didn’t have a hoot of a time.

Wanna know something the Daily Wire has yet to do? Run the link to the petition to recall Soros-backed L.A. County DA George Gascon (link HERE). The Gascon recall could be the first such defeat ever handed to Soros, a tangible “own” that matters. A Soros defeat in L.A. would embolden other counties and cities to follow suit. But, just like how the local GOP made no attempt to alert L.A. County voters to the importance of the down-ballot DA’s race last year, no one on the right is showing any desire to fight Soros in the real world.

Why bother when it’s so much more fun to share that Atlantic piece about how FORKS are RACIST!!!!?

This leads to another reason why “saying white” is of limited value. On one side you’ve got conservatives with something to lose (like massive Twitter followings or Fox gigs or teat-suckling Daily Wire jobs), and on the other side you’ve got the “outsider” Nick Fuentes types who love scorching the earth with their naughty impishness. Those in that latter group can always be counted on to say white “improperly” or indelicately. This will invariably cause the people in the former group to melodramatically “denounce” the wrongspeak, lest they risk cancellation themselves.

And once again, no actual progress will be made as the right-on-right bickering between based and cucked distracts all parties from countering the left.

Two of the most tough-talking “warriors” on the mainstream right are Daily Wire’s Andrew Klavan and Townhall’s NATO errand boy Kurt Schlichter. Since January, both “men” have vowed merciless war against the left, promising to deliver blowback and vengeance to the Biden/Harris crowd.

I’ll remind you that Schlichter and Klavan were among the first guys to call for my cancellation in 2013 because of things I’d said about Auschwitz twenty years earlier. I barely knew either of those clowns, and to the extent that I did, it was perfectly cordial (Klavan via correspondence, Schlichter through my GOP events, which he occasionally attended). But Kolonel Koward and Cliff Klavan rushed to virtue-signal how vigorously they could condemn a fellow rightist for his evil words.

I’m not trying to be self-indulgent by bringing that up. I’m making a point that these faux-macho jellyfish are gonna make water the minute anyone says “white” a little too vehemently. That’s the pitfall of “saying white.” Most conservatives with an actual audience have little stomach for it, and those on the fringe who have a large stomach for it are either illiterate imbeciles or trolls who just like Jokering shit up (if one thing’s true of the “groyper” generation, it’s that it’s produced no new Jared Taylors or Peter Brimelows—genuine intellectuals who can handle these issues adroitly).

Even Tuck, for all the “white” he crammed into that recent monologue, still felt the need to frame the issue as “we all bleed red, white, and blue,” similar to his take a few weeks ago on mass shooter Justin Tyran Roberts (a black who targeted whites): “This may be the last time you hear his name on television. On one level, that’s fine with us. Picking at America’s [racial] wound is unwise. We’ve always thought that. We think it more now than ever. A multiracial country can only survive if it self-consciously deemphasizes race.”

Tucker might be willing to say “white,” but he ain’t never gonna say “black,” and an argument can be made that saying “black” has become more important than saying “white,” because the most destructive elements in the black community—malignant elements unique to the black community in terms of percentage of population—target not just whites but Asians, Hispanics, Pakistani UberEats drivers, and pretty much everyone else. And let’s be frank—most of the antiwhite rhetoric (CRT, “white privilege” propaganda, 1619 brainwashing) comes from blacks, or from Jews and whites who promote it in the name of blacks.

But while you might persuade a few Tucker types to say “white,” nobody, and I mean nobody with any reach is gonna say “black” in anything other than glowing terms. After all, the GOP has to prioritize winning that black vote!

An example: Amazon Studios’ new “hiring inclusion policy” for actors mandates—mandates—that each production must hire “30% white men, 30% white women and non-binary people, 20% men from underrepresented races and ethnicities, 20% women and non-binary people from underrepresented races and ethnicities.” Yet near the bottom of that policy is a disclaimer: “In all hiring, a particular employment decision may not be made on the basis of an individual’s race, age, color, gender, sex, sexual orientation, gender expression, national origin, disability, or other protected characteristic.”

They know what they’re mandating is illegal. Like all of the incipient apartheid policies in government and the private sector, this can be fought in court.

Trump left us a potentially sympathetic SCOTUS. Why waste his one decent legacy?

And maybe meet a guy like Soros on a real battlefield, rather than a VR one.

Social media obsession has blinded many rightists to the fact that Section 230 immunity (Twitter totally can ban someone just for being white) does not exist in the brick-and-mortar world. That’s why that obsession benefits the apartheid advocates; they want you to get so used to Section 230 immunity that you forget that it doesn’t apply to your kid’s school or your workplace.

Again, here’s the Gascon recall petition. Signatories need to live in L.A. County, but donations are needed. If you don’t live here spread it to folks who do.

Tired of word wars, virtual dunks, and quixotic krakens? Try coming back to the real world. You might just find it invigorating.