‘Richard Jewell’: The Problem With Profiling 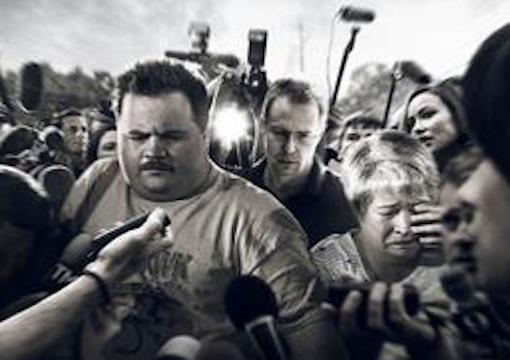 Richard Jewell is director Clint Eastwood’s well-acted, solidly scripted biopic about the racial-profiling fiasco that undermined the 1996 Atlanta Olympics bombing investigation. The FBI monomaniacally targeted an innocent rent-a-cop for being a Frustrated White Man, and then leaked his name to the press despite never having any actual evidence against him.

Much of the media has denounced Clint’s movie for casting aspersions upon America’s noble Deep State. Just because our beloved Intelligence Community has a lamentable track record of going off on wild-goose chases against innocent citizens and then inviting the press to pile on to turn their daily existences into living hells is no reason to, you know, make a movie about it. Some bits of history are best swept under the rug.

The New Yorker, for example, is hallucinatory with rage about the film:

Yet, paradoxically, there is another woman—an ultra-competent and accomplished woman—who’s never mentioned and never seen and yet is obliquely, perhaps unintentionally, implied throughout the movie: Hillary Rodham Clinton.

Uh…no, actually the movie is not at all about Hillary.

Jewell was working security during a concert at Atlanta’s downtown Centennial Park when he noticed a suspicious backpack under a bench. He began to clear the crowd, so when the three pipe bombs inside exploded thirteen minutes later, only one person was killed.

Jewell was initially acclaimed a hero. But when the FBI couldn’t come up with a clue who the terrorist was, they began to obsess over the notion that Jewell fit the profile of the lone white male who wants so much to be the good guy that he becomes the bad guy.

The FBI leaked this wild surmise to The Atlanta Journal-Constitution, which explained to its readers:

This profile generally includes a frustrated white man who is a former police officer, member of the military or police “wanna-be” who seeks to become a hero.

This was not a wholly ridiculous conjecture. For example, firemen who love fighting fires so much that they turn arsonist are hardly unknown. Joseph Wambaugh’s true-crime book Fire Lover tells of an arson investigator in my neighborhood who used to set stores where my mother shopped on fire so he could call in the first report.

But this is a memorable phenomenon, precisely because it’s also a fairly rare one.

“I particularly liked the climactic moment when Jewell asks the FBI if they have a single clue tying him to the bomb.”

The 1990s were the peak of the prestige of the FBI’s fad of “criminal-profiling” the perpetrators of exotic incidents, which was seen as more moral and scientific than the despised practice of racially profiling crack dealers.

Racial profiling relies upon common stereotypes about common criminals—for instance, that the black youth standing on the corner who dresses and acts like a drug dealer might indeed be a drug dealer. It tends to work because stereotypes are almost always statistically true on average. But the entire subject of black crime is so depressing and repetitious that everybody officially pretends that racial profiling can’t possibly work.

In contrast, the much more respectable form of profiling tries to predict the personalities of felons of glamour crimes like serial murders and Olympic bombings. Many movies have been made about genius FBI profilers who solve mysteries by getting inside the twisted minds of psycho killers. Unfortunately, as Malcolm Gladwell scoffed in 2007 with only modest exaggeration, “It is not a triumph of forensic analysis. It’s a party trick.”

The fundamental problem is that the unusual crimes that obsess the press are, by definition, unusual, and thus their profilers must draw upon much smaller sample sizes than routine crimes like crack dealing.

For instance, in an even more important case, the post-9/11 anthrax murders that helped drive the Intelligence Community so nuts that it argued for invading Iraq, the FBI spent six years tormenting bioweapons expert Steven Hatfill before paying him about $5 million for their abuse.

Remarkably, Eastwood is likely a more consistent director now in his later 80s than in his early 80s when he made some forgettable movies like Hereafter and J. Edgar before his 2014 comeback American Sniper.

We hear constantly these days about Baby Boomers, but I keep seeing movies directed by or starring amazingly old yet still competent pre-Boomers such as Eastwood, Martin Scorsese, Al Pacino, and Christopher Plummer. When will they shuffle off and finally allow us poor Boomers our moment in the spotlight?

The 89-year-old Clint is more or less the Republican Woody Allen, the anti–Stanley Kubrick. While Kubrick took years between movies in the hope of making each one he eventually delivered a masterpiece, both Eastwood and Allen see filmmaking as an inherently hit-or-miss enterprise in which sheer quantity is the surest hope of some being of quality. Eastwood and Allen have made a huge number of movies, many of them not terribly effective, but occasionally, as in Woody’s Midnight in Paris and Clint’s jaw-dropping American Sniper, the old dogs have their day.

Richard Jewell isn’t another Sniper, but it’s above average for an Eastwood movie. The screenplay by Billy Ray, who made the 2003 film Shattered Glass about another media scandal, Stephen Glass’ absurd New Republic articles, is quite coherent.

The new movie is a tragicomic riff on Sniper’s famous “sheep, wolves, and sheepdogs” speech:

And then there are those blessed with the gift of aggression, an overpowering need to protect the flock. These men are the rare breed who live to confront the wolf. They are the sheepdog.

Unlike Chris Kyle, however, Richard Jewell was a sheep, or perhaps a goat, who identified with the sheepdogs, a man who wanted so much to protect and serve that he was once arrested for impersonating a law enforcement officer. When the FBI put him through unethical exercises to concoct evidence against him, he kept cooperating with his persecutors, explaining: “I’m law enforcement too.”

Eastwood and Allen generally believe in star power. Hire movie stars and let them have some freedom while the director keeps to a quick schedule. For example, Richard Jewell includes the always terrific Sam Rockwell (Three Billboards Outside Ebbing, Missouri) as the hapless security guard’s terrier lawyer, Kathy Bates (Misery) as the protagonist’s mom, Jon Hamm (Mad Men) as the FBI agent, and Olivia Wilde as the reporter.

Lately, Eastwood has been experimenting with deviations from his strategy of hiring big names. Last year’s The 15:17 to Paris about the three U.S. servicemen who defeated Islamic terrorists on a French train starred the heroes themselves, who, unfortunately, didn’t prove to be new Audie Murphys.

In Richard Jewell, Clint’s big gamble is on making a movie in which the hero is a depressing fat guy who died of diabetes at 44. Eastwood employs Paul Walter Hauser (who was skater Tonya Harding’s pathetic bodyguard/hitman in I, Tonya) as Jewell.

In a previous, presumably higher-budgeted incarnation, Jonah Hill had been set to star, with Leonardo DiCaprio as his lawyer.

Financially, Clint’s gamble on Hauser carrying a movie won’t pay off. The movie opened to a tepid $5 million first weekend.

Artistically, though, it’s not at all bad, building to a couple of outstanding speeches in which the passive Jewell finally stands up for himself. Clint should have put those highlights in the trailer.

I particularly liked the climactic moment when Jewell asks the FBI if they have a single clue tying him to the bomb.

It reminded me of an instructive incident in my own journalistic career. About a dozen years ago, I was provided with the name of another rumored suspect in the anthrax attacks (I won’t mention the name, but it was neither Hatfill nor Bruce Ivins, who died just before he would have been arrested in 2008).

For six hours I happily fit random facts I found on the internet about this guy into the narrative I was weaving about his guilt. Just before hitting the Publish button, I paused to perform a reality check: What would I find if I looked at my evidence about this poor bastard once again, but this time from a skeptical perspective?

Suddenly, I was overcome by a gestalt: The profiles turned into a Rubin vase. I realized that I had nothing other than my now-shattered overconfidence.

Sadly, not everybody learns that lesson so cheaply.