The Racial Reckoning on the Roads 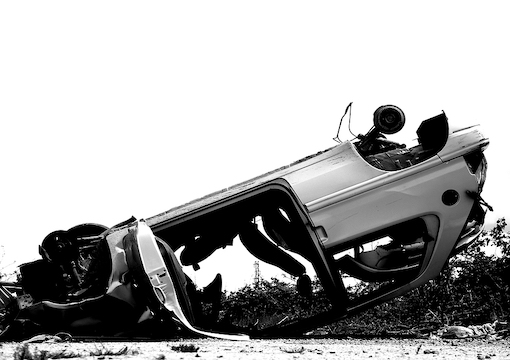 As I may have mentioned once or twice over the past year, the media-declared “racial reckoning” following the death of George Floyd on May 25, 2020, has been getting a lot of blacks murdered by other blacks. But I am not being ironic in saying that I am now stunned to find out that motor vehicle fatalities among blacks similarly soared 36 percent in June–December 2020 versus the same period in 2019, compared with a 9 percent increase among the rest of the population.

Whenever I uncover data that suggests that the reigning mental models of the great and the good have blood on their hands, I’m accusingly asked: Why do I care? What kind of disreputable weirdo am I to speak out just because more of my fellow Americans are dying violently?

Okay, okay, I’ll confess: Not only am I a notorious anti-murderist, I’m an anti-crashite as well.

The federal National Highway Traffic Safety Administration recently issued a report entitled “Early Estimates of Motor Vehicle Traffic Fatalities and Fatality Rate by Sub-Categories in 2020” showing that total road deaths among all races were up 7 percent from 36,096 in 2019 to 38,680 in 2020.

That’s despite miles driven by the American public falling 13 percent last year due to the pandemic. Put them together, and that’s a ridiculous increase in the death rate of over 23 percent per mile.

Among those still on the road, spectacularly bad driving grew. For example, ejections (being thrown out of the vehicle) roughly doubled between February and April and remained consistently above 2019 levels for the rest of 2020.

Impairment due to alcohol among crashing drivers was up moderately in 2020 over 2019, but not as much as marijuana and opioids.

Average speed was up about 5 percent on urban roads (where traffic was less of a hindrance in 2020) but was no different on rural roads.

Traffic deaths were up 7 percent overall comparing 2020 with 2019, and some crash factors and demographics grew even more:

But the worst single increase in deaths from 2019 to 2020 is 23 percent more black people being killed. The NHTSA writes:

In contrast, among everybody else, road deaths were up less than 4 percent in 2020.

As I mentioned, in the last seven months of 2020, the era of the racial reckoning, black deaths increased 36 percent over 2019, while nonblack deaths rose 9 percent. 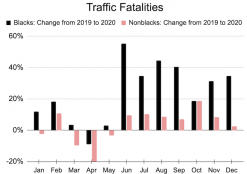 While black fatalities were up more than those of nonblacks in each of the first five months of 2020, black road deaths exploded in June along with riots and murders. In the tumultuous first month of the racial reckoning, 743 black people were killed in traffic fatalities, up from 478 in June 2019, a 55 percent increase.

In the social sciences, that’s an enormous increase.

“Okay, okay, I’ll confess: Not only am I a notorious anti-murderist, I’m an anti-crashite as well.”

Traffic deaths should be going down, constantly. Indeed, deaths per mile driven steadily fell through 2014 (after a bump up in the party-hearty late 1970s). After all, vehicles ought to be getting safer due to technological progress. And we now have the big data artificial intelligence capability to figure out which roadways are most hazardous and why, and fix them.

But then, like the number of murders going up 23 percent in the last two years of the Obama Administration when the White House turned anti-cop, road deaths grew 15 percent from 2014 to 2016.

Did the same factors that exacerbated the murder rate during the first and second BLM eras—cops withdrawing and black lowlifes feeling validated—also worsen the carnage on the blacktop?

I don’t know. The NHTSA only began breaking out fatalities by race in 2019, so I’d barely looked into these trends before.

Note that blacks are not terrible drivers. While blacks were 55.9 percent of known murder offenders in 2019’s FBI crime statistics and 53.2 of homicide victims, they were a much more reasonable 16.9 percent of traffic deaths in 2019. So, blacks are somewhat more likely to be killed in car crashes, but the proportion is nowhere near as absurd as with murder. If blacks could get their share of America’s murders down to 16.9 percent, this country would be a racial utopia.

(Two methodological asides: While we can usually distinguish between perpetrator and victim in homicides, although they don’t differ much racially, guilt is murkier in traffic statistics. Also, like most police reports, the car-crash statistics don’t do a good job of distinguishing between whites and Hispanics, so in my graph I simply lumped the rest of the U.S. population together into “nonblacks.”)

But then the black share of road fatalities rose to 19.7 percent during the racial reckoning of June–December 2020: still not as awful as black gun violence, but moving in the wrong direction.

I had speculated in 2016 “Is There a ‘Ferguson Effect’ Behind Rising Highway Deaths?”:

Presumably, much of what’s going on is a belated rebound from the rise in gasoline prices in the later 2000s and the ensuing Great Recession, which cut miles driven and drove a lot of marginal drivers (e.g., teens, illegal aliens, etc.) out of owning a car…. As commenters have suggested, maybe the spread of smartphones is making us more distracted drivers?

But still…is this related to the Ferguson Effect that has been driving up homicides over almost precisely the same time period? Are cops policing the streets and highways less proactively, spending more time in the donut shop, because they don’t want to wind up on YouTube as the face of Implicit Bias and Systemic Racism Against Black Bodies?

But we didn’t have data broken out by race back then so I couldn’t pursue the question.

During the first three years of the pro-cop Trump administration, traffic fatalities per miles driven, like murders, drifted downward.

But then came the pandemic and the racial reckoning. Police stops declined in March 2020 as cops socially distanced, and then went lower in the summer as The Establishment indulged in an anti-police hissy fit.

For example, the Associated Press articulated this month:

In other words, according to the AP, the law arresting fewer criminals is an “improvement,” so long as they are black criminals. Not surprisingly, the murder rate in St. Louis was the worst in the country in 2020.

About the time last summer that the Associated Press started reverentially referring to blacks as “Blacks” (but continued to spell whites as “whites”), evidence began piling up that blacks had become a little too thrilled by their new image as morally deserving to be above the law. Mass shootings at black parties exploded as the thought of a black man being dissed (by another black) became increasingly intolerable in an American culture that now values black self-esteem above all.

Could it be that between the declining fear of being pulled over, the explosion in black feelings of exuberance and entitlement, not to mention the stimulus checks, blacks just started driving more recklessly?

Back in 2005, I was intensely denounced by ethical paragons such as John Podhoretz for observing that blacks “need stricter moral guidance from society.”

Well, we’ve since tried telling blacks that they are morally better than whites. How’s that working out for all concerned?